Artist Turns a Building into a Giant Rubik’s Cube

How good are you at solving Rubik’s cubes? I’m not ashamed to admit that I’m particularly bad at it. In fact, I have yet to successfully solve a 3×3 cube and I’ve been trying for five years and counting already.

If the usual handheld cubes are starting to bore you and you happen to be in Austria, then you might want to drop by the Ars Electronica center in Linz. The building’s facade is actually covered in 1,085 glass panes that are illuminated by 95,000 color-changing LED lights. It has been used by a number of artists as a medium for their work. 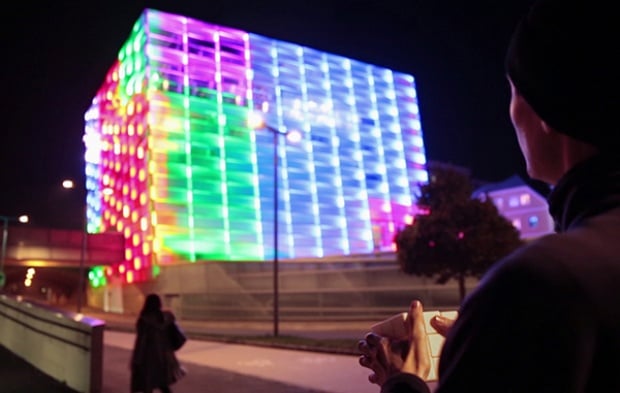 The latest is Javier Lloret, who turned the building into a game. Specifically, he turned it into a giant Rubik’s cube, and he’s calling it the Puzzle Facade.

The interface-cube holds electronic components to keep track of rotation and orientation. This data is sent via Bluetooth to a computer that runs the Puzzle Facade designed software. This software changes the lights and color of the large-scale Ars Electronica’s media facade in correlation to the handheld interface-cube.

The Puzzle Facade is part of Lloret’s thesis for the Interface Culture master program at the University of Arts and Industrial Design Linz.