DrumPants Wearable Drum Pads: Your Body is a Drummer’s Land

We’ve seen a way to play drums using normal objects and even a steering wheel. DrumPants takes on the final frontier: you. Despite its misleading name, DrumPants are not actually pants or even restricted to pants. They’re wearable drum pads that attach to clothing and other objects using velcro. 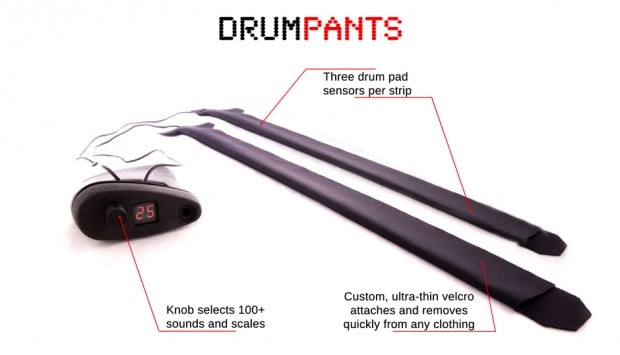 Each kit comes with two drum pad strips, two pedal strips i.e. foot sensors and a control box, which seems small enough to fit in your back pocket. The foot sensors are wired to the two strips, which are in turn wired to the control box. The box has more than a hundred built-in sounds, including other instruments such as synthesizers, guitars and pianos.

Pledge at least $99 (USD) on Kickstarter to get a DrumPants kit as a reward. As hinted at in the video above, DrumPants can be connected to other music apps. It can even be used to emulate keyboard strokes, meaning you can use them to control even non-music software. If you’re interested in these additional functions, make sure to get the kit that comes with a Bluetooth adapter so you can interact with your computer wirelessly. Check out DrumPants’ YouTube page for more demos of the kit.