LEGO Joker’s Fun House: Wanna Know How I Got This Park?

Welcome to Mr. J’s carnival. You must be 1.5″ tall to ride. That’s because this is a LEGO diorama featuring the Clown Prince of Crime’s headquarters of sorts. Made by Paul “Brickbaron” Etherington, it contains lots of moving parts and depicts Batman and other characters in dire straits against Joker and other villains. 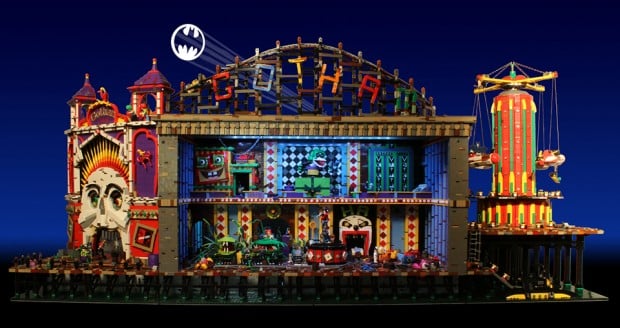 Paul built the diorama over a two-month period using a number of video game levels as his inspiration. Its moving parts are powered by LEGO Power Functions motors. There’s a lot going on here and lots of villains are present, including Joker’s zealot Harley Quinn, the Riddler and Two-Face. Batman is actually in three different scenes at once. He’s being harassed by goons at the entrance of the fun house, battling with Joker on a carnival ride and is also about to be caught by a huge jack-in-the-box. Best to watch it all in the video below:

The Joker’s Fun House won the Best in Show, Evil Genius and Honorable Mention in the People’s Choice awards at the 2013 Brickcon. You can see more of it on Paul’s Flickr page.