A few months ago we featured iSketchnote, an iPad cover that can record and digitize handwritten or handdrawn notes. If chipmaker Qualcomm has its way, that feature may be integrated into the next wave of tablets. To show off the power of its upcoming Snapdragon 805 processor, Qualcomm will be displaying what it calls Ultra Sound at the 2014 Consumer Electronics Show (CES). 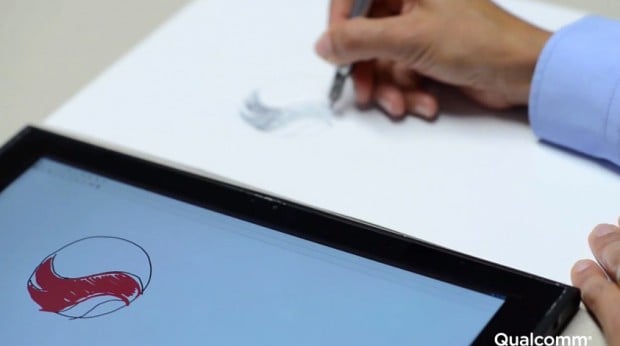 Like iSketchnote, Ultra Sound copies doodles made with ink and paper in real time. The prototype shown in the video below requires a digital pen that’s also an ink pen. When you use the digital pen on paper, it emits ultrasonic vibrations. Those vibrations are picked up by microphones embedded in the Snapdragon 805-powered tablet and then analyzed to replicate the paper sketch on the tablet’s screen.

It would be nice if Ultra Sound worked even if the tablet was in sleep mode, so you can keep writing or doodling for long periods of time knowing that your work is being backed up in real time.