A couple of years ago we saw a pair of taser gloves made with everyday items. But both gloves had to be in contact with the target in order for them to deliver a shock. GreekGadgetGuru’s stun glove lets you ward off attackers with just one hand. 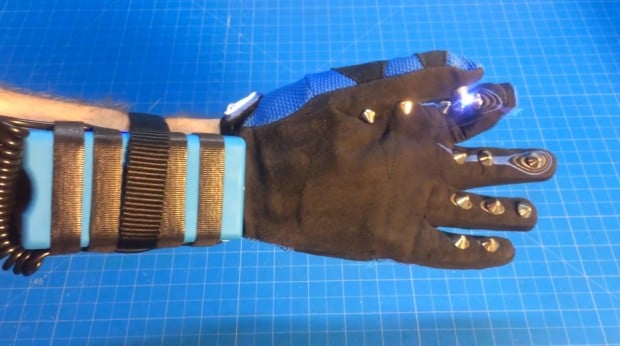 The metal spikes on the glove are wired to the stun gun on his wrist. GreekGadgetGuru made it so that the polarity of the fingers are alternating. This means he only has to touch something – or someone – with two adjacent fingers for the current to flow. He also incorporated what appears to be a flex sensor into the glove’s switch, enabling him to toggle the flow of electricity just by flexing his hand.

Send GreekGadgetGuru a message on Facebook if you want to know how he made the stun glove. Then send a message to all the jerks who – nope. Just kidding. Breathe. Easy.