Robots Get Their Own Network Called RoboEarth (SkyNet Goes Online)

Robots that are made to perform certain tasks require a lot of processing power and lots of programming. If you bring in another similar robot, you have to complete that programming again. That may change in the future with a group of researchers testing out something akin to a robot brain based in the cloud called RoboEarth. 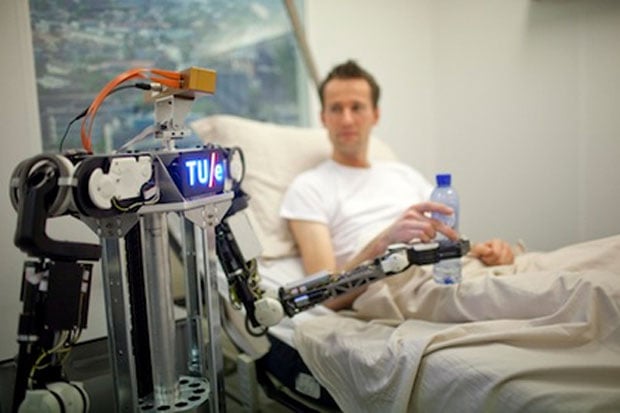 The test is the result of a project funded by the EU that has spanned four years. The researchers say RoboEarth is like the World Wide Web for robots. The idea is that robots could upload the steps needed to complete certain tasks to the RoboEarth platform and that way only one robot would need to be programmed and all others could get the steps from the cloud.

“At its core RoboEarth is a world wide web for robots: a giant network and database repository where robots can share information and learn from each other,” said Rene van de Molengraft, the RoboEarth project leader.

The RobotEarth system is being tested in a mock hospital room at Eindhoven University. One robot will roll into the mock room and make a map that will be shared with other bots via the RoboEarth system. The other robots will then navigate the room and give the fake patient drinks.

It all sounds really cool, and scary at the same time, like some sort of SkyNet precursor.