GoPro makes some of the most popular cameras out there for recording action sports. Typically when we see video made with one of these cameras it is on YouTube and often has people doing things that are dangerous. GoPro has announced a new camera kit that has specialized mounts for people that want to record their jam session in the garage or on the stage. 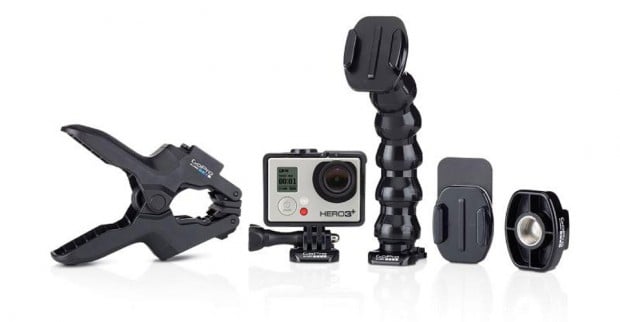 The camera is called the GoPro HERO3+ Black Edition/Music and it comes with several mounts designed specifically for use on the stage. The mounts include one that allows the camera to fit on a mic stand with US or European mounts. The camera also comes with adhesive mounts for attaching directly to musical instruments.

What might be the most interesting mount looks like a clamp you might use in the workshop. It is designed to clamp onto just about any surface and securely hold the camera in place. It can also be used with other mounts in tandem for more flexibility. The Music camera kit will hit stores this spring for $399.99(USD).