I’m sure you’ve seen videos of floppy disk drives rigged to play music. Simon Schoar took the hack to the next level with RumbleRail, a modular floppy jukebox that plays MIDI files loaded to its SD card slot. It’s run by an ATMega microcontroller, has a 128 x 64 LCD display and two RGB LEDs for each drive that light up in sync with the music. All of its parts are neatly arranged on a machined aluminum rail. 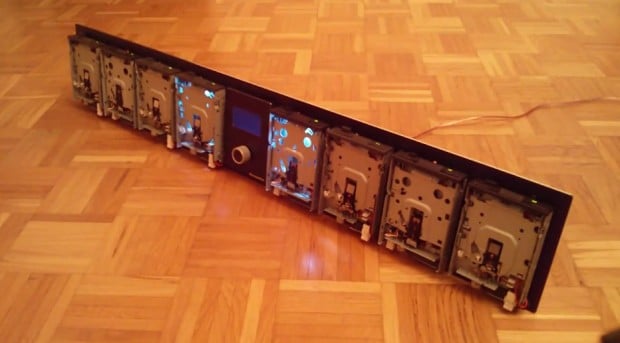 According to Simon, depending on the file extension of the selected MIDI files, RumbleRail will either map MIDI tracks to the drives, map MIDI channels to the drives or just play as many notes as possible at once. Here’s the RumbleRail playing the Pirates of the Caribbean theme song:

And here it is playing the Ghostbusters theme song in the dark, because it ain’t afraid of no ghost:

They sound like highly organized mosquitoes. Fire up Lynx and head to Simon’s website to find out how you can build your own RumbleRail.