I have always thought swords were pretty cool. In fact, I used to take fencing, if only because no one taught kendō in my area. If you have ever picked up a stick and started a mock sword fight with someone, you know that your foes tend to become liars quickly. Even if their knuckles are bleeding, they will deny being hit by your sword/stick. 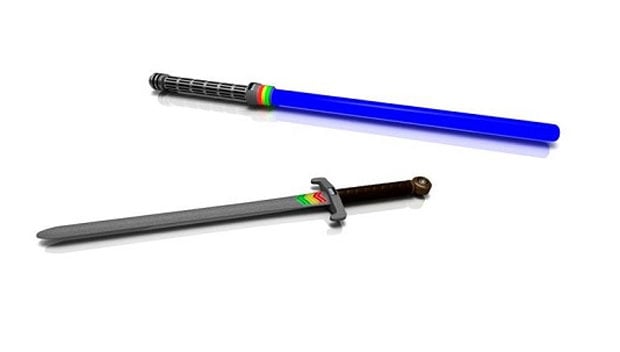 Sabertron is working on a new sword fighting system that takes away the ability for your opponent to lie in this way. The swords keep track of hits and can tell the difference between a person and another sword. According to its makers:

Sabertron uses wireless communications to determine when two swords have clashed. If a player strikes the ground, the microcontroller can ignore the strike because the sword is tilted down at an angle. If a player strikes a tree, a bystander, or the player’s self, the microcontroller will detect those objects as the opponent. This is a limitation and players must agree to be honest. This limitation will be removed in follow-on products that support Melee Mode, by utilizing proximity detection circuits. It is possible that the initial reward product supports this mode, depending on the production changes to bring Sabertron to the masses, but is not guaranteed.

Each sword comes complete with sound effects and LED lights that count down the points until victory or defeat. Initially, you’ll only be able to get versions looks like a lightsaber, but if they should exceed $500,000 in orders, they’ll also offer a medieval blade. Down the road, they hope to release accessories that allow for multiplayer melee battles.

If you want a pair, you’ll need to pledge at least $125(USD) over on Kickstarter to get in on the sword-swinging action when they launch. Delivery is estimated for Fall 2014.