3D printing can help you create prototypes or mockups quickly. Or should I say relatively quickly – it can take a 3D printer hours to print even moderately-sized objects. To speed things up, students from the Human-Computer Interaction Group at the Hasso Plattner Institute tested adding LEGO to their workflow. 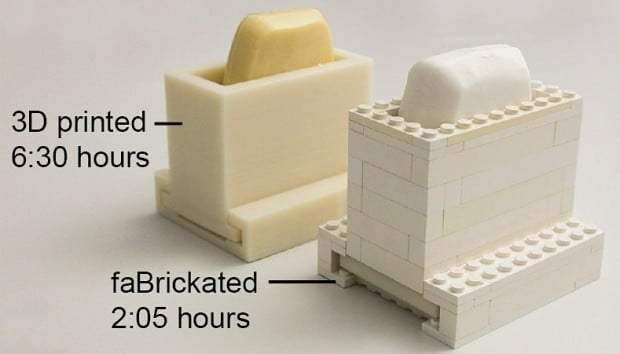 Researchers Stefanie Mueller, Tobias Mohr, Kerstin Guenther, Johannes Frohnhofen and Patrick Baudisch call their project faBrickation. The idea is to print just the crucial parts of a prototype, then build the rest out of LEGO. To do that, they wrote a program called faBrickator, where they can open 3D models…

…and “Legofy” it at the press of a button.

…and build the rest with LEGO using instructions generated by faBrickator.

They can also use faBrickator to go back to a 3D model, modify it and then print only the parts that were changed, once again saving time.

The group claims that on average, faBrickation lets them make prototypes nearly two and a half times faster than using 3D printing alone. I wonder if they can make a reverse faBrickation scanner, so laypeople can start making a “3d model” out of LEGO instead of a modeling software, scan that LEGO model then run the resulting model through faBrickation.

[via Hasso Plattner Institute via PSFK]