A few years ago we found out about mighty Roombas that were moonlighting as sumo wrestlers. Jose Julio’s RepRap 3D printer also has a sporting spirit. The robotics enthusiast unlocked his gadget’s potential and turned it into an air hockey player. 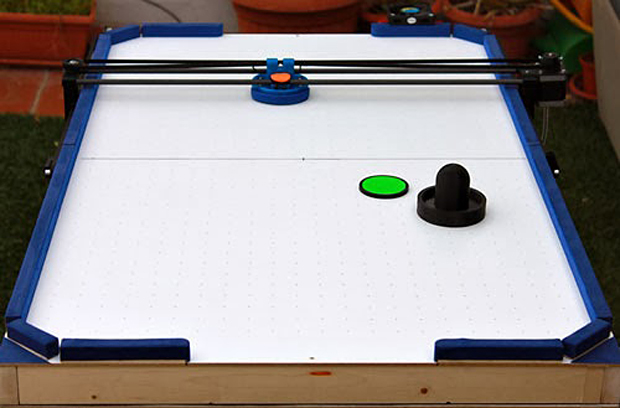 The robot has three motors: two for moving its mallet across the y-axis and one for movement along the x-axis. Jose Julio wrote the drivers for the motors in Arduino. He then color-coded the mallet and the puck, installed a PlayStation Eye camera and wrote a program in C to make his robot see. Finally he wrote another Arduino program that predicts where the puck will go so that its motors can react appropriately.

Another neat thing about Jose Julio’s setup is that the table uses two old PC fans to create a cushion for the puck to slide on.

Jose Julio knows that his robot still needs a lot of practice – and programming – before it’s ready for primetime. For instance, it doesn’t know where the goal is, though as you saw in the video it can already score even with that handicap. But Jose Julio says he can easily imagine RepRap enthusiasts making air hockey robots of their own, improving and refining its programming so that robots could have different difficulty levels and even different strategies.

Insert a token in your browser and head to Jose Julio’s blog for more on his project.