Molson Canadian Beer Fridge Locks out Anyone Not from Canada

Beer is one of the most popular adult beverages in the world. We might not all like our beer the same temperature, but few things make us happier than free beer. One Canadian beer company has set off with an interesting campaign that might make Canadians the most popular people on the block. 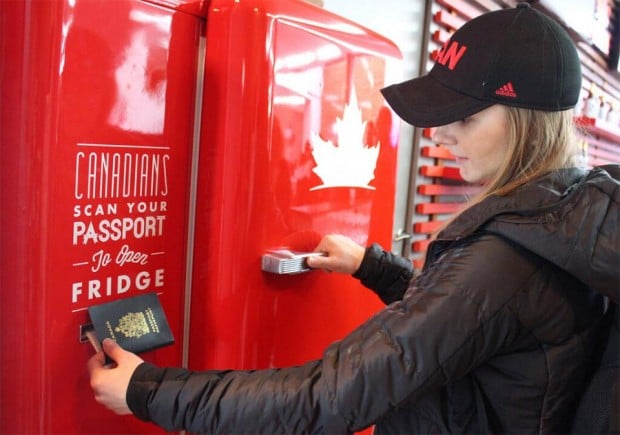 Molson Canadian took some automated beer refrigerators to various locations around Europe including London and Brussels. The bright red been fridges had the Canadian maple leaf on the front and a sign that read, “Canadians scan your passport to open fridge.” A special passport scanner inside verifies that it’s actually from Canada before opening the fridge door.

Molson recorded footage from the people trying to get the fridge open in different areas. In at least one place, a Canadian showed up, scanned his passport, and opened the fridge. The red box was stuffed to the gills with free Molson Canadian beer that was shared out creating an instant party.

The company recently brought the fridge to the Sochi Winter Olympics, offering up free beer to Canadian athletes.