The burgeoning small scale 3D printing industry is focused on producing plastic or metal objects. A small team of makers led by Gerard Rubio hopes to turn the spotlight on a more practical material: fabric. The OpenKnit is a work-in-progress open source printer that automatically knits thread to create clothing based on digital templates. 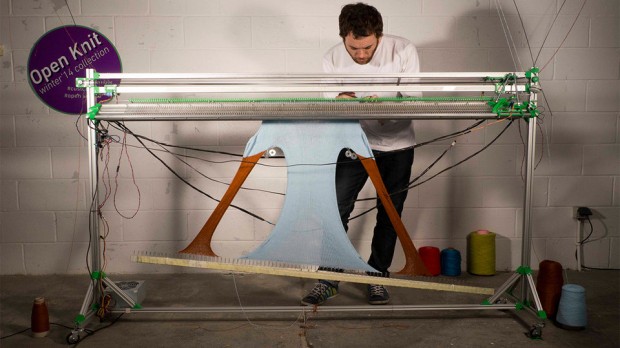 The printer is powered by an Arduino Leonardo and can control three needles at the same time. Like the pioneering RepRap, the OpenKnit printer itself will have parts that can be 3D printed to further save on costs. Gerard says the printer should cost around $750 (USD) to build.

Aside from the printer itself, OpenKnit also has a companion program called Knitic that can be used to design clothes. Knitic was developed by Mar Canet and Varvara Guljajeva, who used their experience from hacking old electronic knitting machines to create a user-friendly program for designing clothes. Finally, there’s Do-Knit-Yourself, a “virtual wardrobe” where people can share their designs. Think of the site as the Thingiverse of clothing.

Obviously, all three parts of the OpenKnit project are still in their infancy, and the clothes that have come out of it are not much to look at. But I hope the project takes off and democratizes fashion, because that industry badly needs a wake up call. Check out the OpenKnit website to learn more about the printer. Makers should head to Gerard’s Github page to find out how they can replicate the device.