If you liked the idea of the MakerBot Replicator 2 3D printer that launched a couple years ago, but didn’t want to spend the money the thing costs, check this out. MakerBot has announced that it is now taking pre-orders for the cheapest 3D printer it has ever offered. The new printer about half the cost the Replicator 2 demanded when it launched. 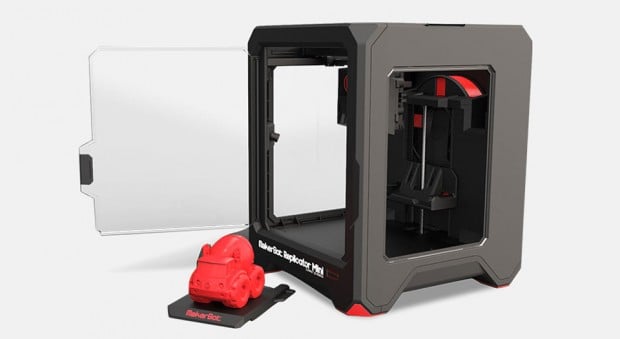 The printer is called the MakerBot Replicator Mini and it will sell for $1375(USD). The 3D printer is sized for use on cluttered desks at home or in the office. It is also aimed at use in educational environments. The Mini has a bed that doesn’t need to be leveled. It can create objects up to 3.9″ L x 3.9″ W x 4.9″ h.

Default print resolution for the device is 200-microns, though its motors are capable of stepping at just 11 microns on the X/Y axes and 2.5 microns on the Z axis. The Mini is optimized to use the MakerBot PLA Filament that comes in over 17 colors. It’s also got an onboard camera so you can monitor prints remotely. The printer is also compatible with print projects on Thingiverse.

While it’s certainly not the cheapest small 3D printer, it is made by one of the most experienced 3D printer manufacturers, and its build quality, industrial design and feature set look very good. The Replicator Mini will ship sometime this spring.