The folks at PiFace – makers of hardware interfaces for the Raspberry Pi – wanted to make a camera rig that could create the bullet time effect popularized by The Matrix, but they didn’t want to spend thousands of dollars on cameras. Naturally their first instinct was to see if they could use the Raspberry Pi to make a cheaper alternative. To their surprise, their idea worked! 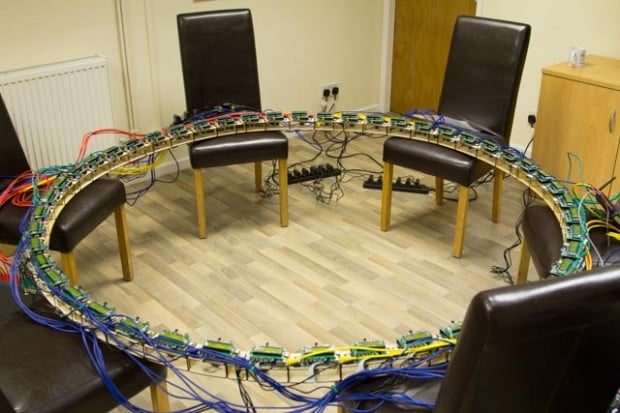 PiFace calls its rig the Frozen Raspberry Pi or Frozen Pi. It consists of 48 Raspberry Pis each with a Raspberry Pi Camera and a PiFace Control and Display interface, all mounted on a laser-cut wood frame. The computers are networked via Ethernet so they can be simultaneously triggered remotely and so that the pictures they take can be sent to a single computer. PiFace wrote a Python script to collect the pictures and arrange them in order. Skip to around 2:17 in the video below to see the rig in action and people in inaction.

Slow down time and head to the PiFace blog to find out more about how they made the Frozen Pi.