Eating a slice of pizza on the go isn’t the neatest option on the menu. But it’s technically a quick meal on the go, and if you’ve gotta eat, you gotta eat.

Aiming to make eating pizza less of a mess is KonoPizza. 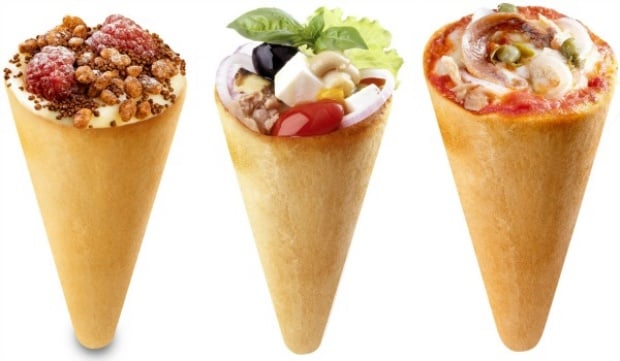 With over 130 locations worldwide, KonoPizza serves up pizza in a cone in all sorts of outrageous flavors, including the likes of Tiramisu pizza that’s filled with cream, biscuit and coffee syrup. There’s also the breakfast-in-a-cone pizza called Pancetta Prima that’s filled with eggs, bacon, and cheese. If you’re not as adventurous, you can go for the usual pizza toppings as your cone fillings, like cheese, sausage, and ham. Plus, each KonoPizza is portion-controlled, so they’re actually pretty low in calories and fat.

So far, there are only a couple of U.S. locations of Kono Pizza, including one in Edison, New Jersey, and another opening very soon in Raleigh, North Carolina.