The very talented musician Imogen Heap and her colleagues at Mi.Mu are working on a glove that will allow you to make music by moving your fingers and hands. Think Minority Report, but instead of flipping screens around your movements create sounds. Air drumming is about to be legit. 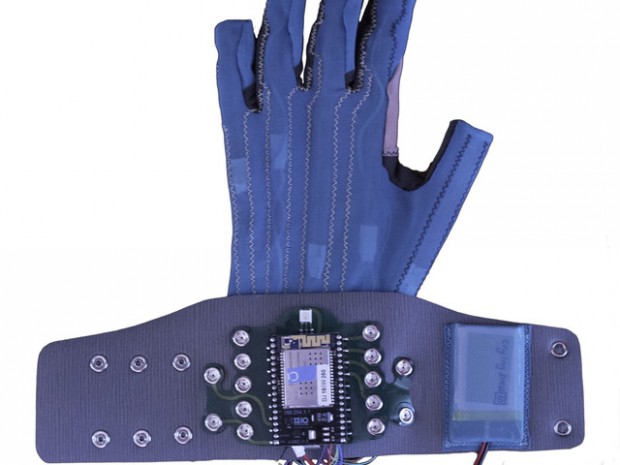 Mi.Mu has an input and output board called x-OSC that connects the glove to a computer or multiple computers over Wi-Fi. It also has an accelerometer, a gyroscope and a magnetometer. Along with the flex sensors on the glove itself, the system can detect “the orientation of your hand, the “flex” of your fingers, your current hand posture (e.g. fist, open hand, one finger point), the direction (up, down, left, right, forwards, backwards) of your hand [and] sharp movements such as drum hits.”

You can map one or more of these movements to control music software with the help of Mi.Mu’s own application, which converts your movements to OSC or MIDI. This means you can use the glove with any software that can handle those two files. The video below shows Imogen performing (!) a song using only two Mi.Mu gloves to control the music:

As you may have noticed, the glove allows the wearer to activate multiple tweaks or sounds at once. You can also use gestures to switch between your saved mappings, which should reduce the number of movements you have to memorize for a given performance.

Pledge at least £1,200 (~$2,000 USD) on Kickstarter to receive a Mi.Mu glove as a reward. Hopefully in a few years the glove will be affordable enough, so we can wash away all the hate and society can start advancing.