If 13th Lab has its way, you could soon be playing first-person games using your surroundings as a battlefield. Or a space station, a temple and anything else you can imagine. The computer vision company is working on Rescape, an FPS platform for mobile devices that can scan and digitize your environment, turning it into a video game map. 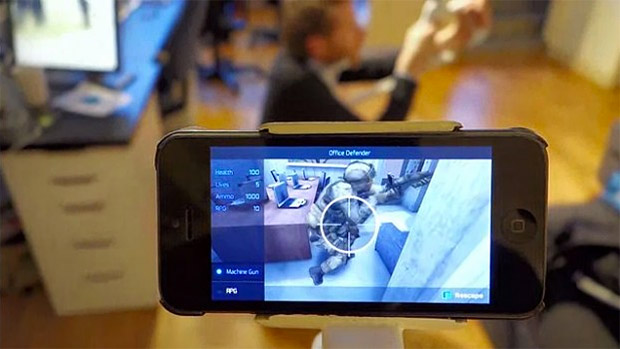 13th Lab uses a robotics technique called Simultaneous Localization and Mapping (SLAM). With the help of cameras and sensors, SLAM allows a device to make a map of its environment and place itself – i.e. know its location – within the map that it just made. The end result is shown in the image above. If you look closely you can see that the iPhone is showing a virtual equivalent of the player’s environment – everything from the structures, objects and even other players. 13th Lab calls this mix of augmented and virtual reality Reality Gaming. 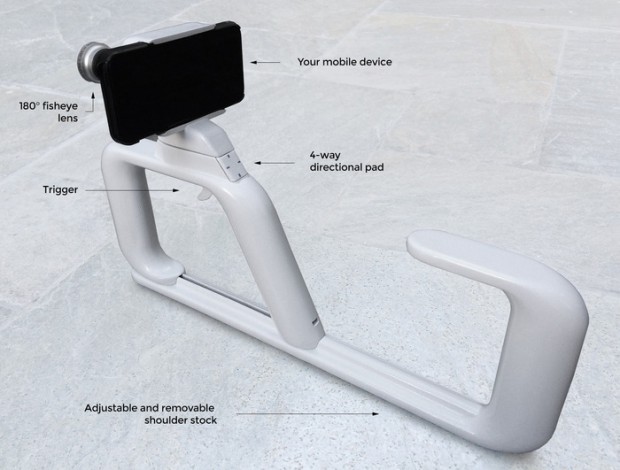 As of now, a Rescape package includes a 180º fisheye lens and an adjustable gun controller with a trigger and a d-pad. To drive costs down and make it easier for app developers to port their FPS games, Rescape will make use of your mobile device to map and digitize your environment, as well as track your position. 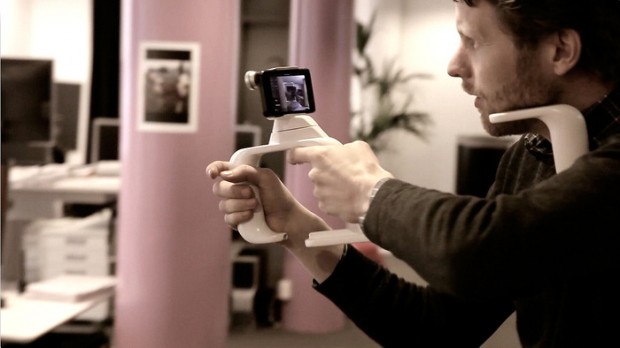 The Rescape software development kit (SDK) handles the mapping feature, as well as the ability to digitally paint over a map and turn it into your battle ground of choice. I don’t know if the SDK will be simple enough for normal folks to understand and use though.  As I mentioned, mobile game developers can port existing FPS games into the Rescape platform, but that’s not as fun as turning your house or university into a game map.

Pledge at least $39 (USD) on Kickstarter to get the Rescape controller and Office Defender, the game shown in the video. Pledge at least $129 and you get the controller, the game and the Rescape SDK. When it launches Rescape will only support the iPhone 5, 5C and 5S, with “experimental support” for the iPhone 4S. 13th Lab promises that it will provide support for Android devices within a few months after the launch.