3D modeling software is often used to visualize and develop concepts – anything from a piece of furniture to a video game. Those programs make it easy to transition from idea to prototype and to refine or duplicate sketches, but they require a lot of practice and training to master. A new company called Gravity thinks it can make sketching in 3D almost as easy as doodling with pen and paper. 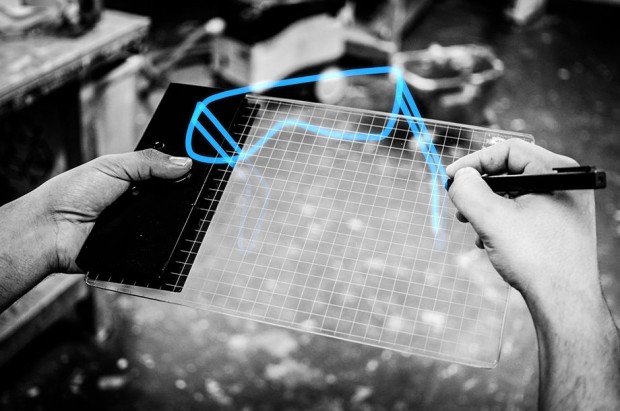 Gravity uses an infrared pen, a control pad with sensors and a pair of augmented reality glasses. You use the pen to sketch in midair, just above the control pad. You won’t need to be M.C. Escher to start creating 3D models though, because Gravity only allows for sketching in one plane at a time. A switch on the pad lets you switch planes, rotating your virtual object to the side where you want to draw. Your sketch will then be visible to anyone wearing the glasses – it could just be you, or a roomful of people.

The founders of Gravity believe that “CAD [computer-aided design] generates perfect shapes that don’t leave room for the imperfection of your early modeling to allow imagination to keep influencing the idea. CAD requires thinking in terms of functions and variables. This is where imagination is defeated. There is much lost in the process of moving from 2D to 3D.” I’m not sure I buy that. Sure, making complex technology user-friendly can help drive innovation and speed up the development of concepts. On the other hand, professionals need the precision and the shortcuts that CAD and other 3D modeling software provide. For example, will Gravity users be able to cut, copy and paste an exact part of a sketch, and will the commands for those features still be intuitive without being tedious?

Sketching in 3D looks cool, but I’m going to let the pros decide if this is just a high-tech whiteboard or a legitimate alternative to 3D modeling software.