Nic Case loves his R/C cars. In fact, he just broke a world record for the fastest R/C car, which is aptly called the R/C Bullet. This one-tenth scale car has hit a top speed of over 188 mph, breaking Case’s own record of 171.97 mph. To put that in perspective, the top speed of a V8 Jaguar F-Type is 186mph. 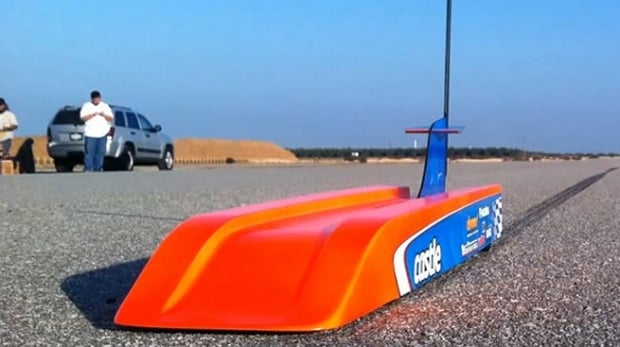 How did it get to be that fast? Most of the car is custom-designed and fabricated to be as light, sturdy, and aerodynamic as possible. The vehicle weighs just 10 pounds and generates 10 horsepower from its electric motors. All of that power is transferred to the wheels using a low-profile scoop-shaped body and 3-inch tires.

Another problem he had to deal with is that when the car gets up to speed, the motor spins so fast that it produces a gyroscopic effect that threatens to throw the vehicle off target. So Nic added a heavy brass weight to the drive shaft that counters the inertia of the motor. Nic thinks he can get it to go even faster with some additional tweaks.