A lot of folks say that 2014 will be the year of wearables, as in wearable technology. We’ve had wearable devices such as watches and cameras for decades, but the past couple of years we’ve seen devices like Google Glass, Pebble, fitness trackers and more. MbientLab is giving tinkerers and small entrepreneurs a chance to ride the wave with MetaWear. 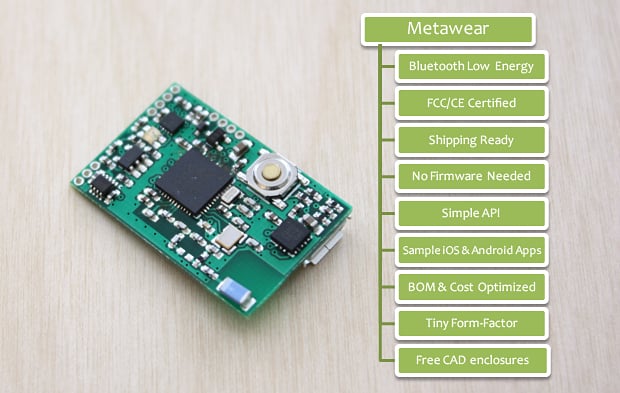 MetaWear is a small, affordable and developer-friendly platform for creating your own wearable device, or at least a prototype. It’s powered by the ARM Cortex M0 SoC. It has Bluetooth LE connectivity and has a built-in accelerometer, temperature sensor, buzzer, coin motor and RGB LED. It also has two analog/digital I/O pins and an I2C bus. On the software side, it already has its own API, and MbientLab will be releasing open source Android and iOS apps for MetaWear as well.

In my brief chat with MbientLab’s Laura Kassovic, she said that the MetaWear can be used to build a fitness tracker that could compete with existing products like FitBit’s products or Nike’s FuelBand if you so choose, saving you a lot of resources in the process: “First off, you don’t have to spend 4 years at University to get your engineering degree just so you can write firmware. So that’s 4 years we are saving you! We are also saving you the time it takes to prototype, test, and certify hardware just so that you can put it on the store shelf. That’s another 4-6 months of reduced development time. We save developers 80 to 90% of their development time and cost with MetaWear (and I think that’s awesome).”

But Laura is also excited about the potential of MetaWear to enable tinkerers to create niche or even one-off wearable devices: “MetaWear will allow developers to create devices that large companies aren’t interested in building or devices that are very niche (and in my opinion, very cool). Perhaps you want to build a necklace that lights up when your Grandma calls. Perhaps you have an Oculus Rift and you want to add force feedback pods you wear on your body to create an even more realistic simulation. Maybe you have a pet iguana and you want to track its movement but you simply can’t outfit your iguana with a Fitbit Flex; so the natural solution is to build custom on MetaWear instead!”

So put on your best fitting browser and pledge at least $30 (USD) on Kickstarter to get a MetaWear kit as a reward. Go and get that Facebook money. Or make a fatness tracker. The power is yours.