Just because virtual reality displays let us interact with 3D interfaces doesn’t mean there isn’t room for the ol’ two-dimensional view inside of them. Oliver Kreylos, a developer who’s been working with 3D software for nearly 30 years, recently demonstrated a Virtual Network Computing (VNC) client that sends a 2D feed of a desktop computer to a 3D virtual reality environment. 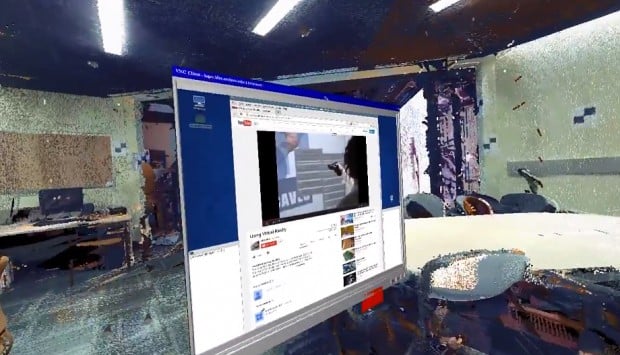 Oliver’s VNC client allows him to open and interact with any number of 2D desktops on a virtual reality environment. Why would you want to do this? Well for one, you can reverse telecommute: imagine working in an island paradise environment while you’re actually in the office. Because you can (theoretically) open multiple desktops at once, the setup also supercharges multitasking and group meetings. You can watch a video walkthrough while playing a 3D game, look at a hundred fullscreen documents at once, have multiple large video chat screens like they do in science fiction flicks and more. 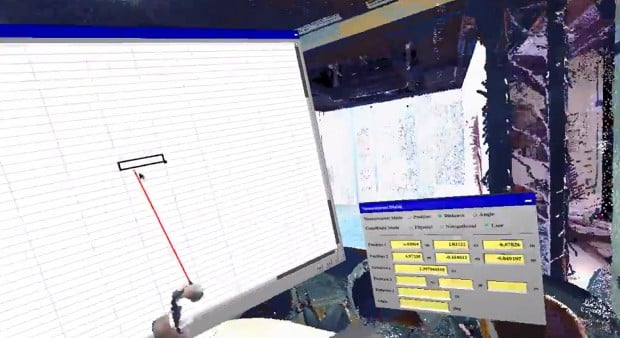 As you’ll see in Oliver’s demo video, developers can also make 2D applications that interact with the 3D environment. In his demo he measured a table that was in his virtual space and then used a Razer Hydra to send those measurements to LibreOffice Calc on his 2D desktop.

We really don’t know how far the rabbit hole goes with this one. Note that the video below may cause dizziness because of the constant change in perspective. It almost made me throw up to be honest. I’m ill-equipped for the future.

Head to Oliver’s blog for more on his custom program. I wonder if you can emulate this feature on the same computer that’s running the VR environment. That would be more useful, although it would probably take a beefy computer to pull it off. Also, watching Oliver’s demo, I can almost – almost! – visualize a four-dimensional space, where you can fit infinite 3D environments. Now I’m really dizzy.