Modern stealth action video games like the Metal Gear Solid series and the new Deus Ex often have a radar feature that lets you see enemies and cameras, among other things. New media artist Sander Veenhof made a similar app for Google Glass. He calls it Watch Your Privacy, and it uses open data to locate nearby surveillance cameras. That includes the mobile kind, i.e. other Glass users.

Watch Your Privacy uses a database of surveillance cameras called OSMcamera. Sander didn’t elaborate how his app spots other Glass users, just that it maps “the latitute/longitude coordinates of each Google Glass user.” 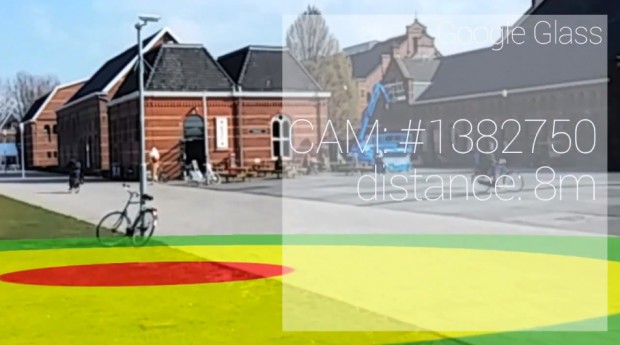 The app marks both cameras and users with a triangular warning sign along with a number, their distance from you and their coordinates. In addition, it marks the approximate coverage area of surveillance cameras. You can either have the area appear mark them as non-safe (red) or safe zones (green). If you want to stay hidden like Solid Snake, you’ll want to mark those areas red. If you feel more comfortable in a place with security cameras then you’ll mark their coverage areas green.