Braille helps visually impaired people read, but there is a lot of printed material that is never converted to that writing system. Blind people also miss out on using mobile devices because obviously they can’t feel the text on screen. MIT’s Fluid Interfaces Group attempted to address this issue with its FingerReader prototype. 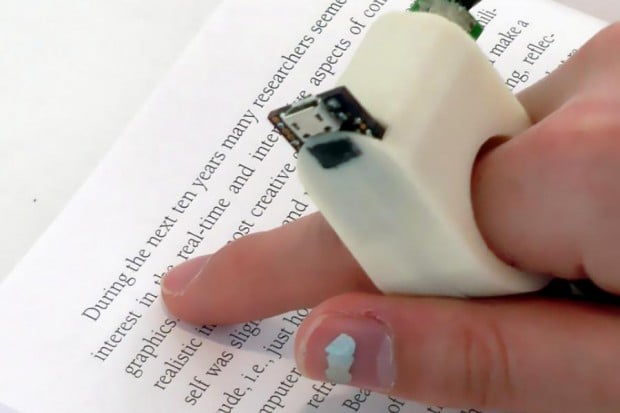 FingerReader is a ring that reads printed text out loud using a small camera and complementary software that analyzes text and reads it aloud. The ring also has vibration motors that are used to guide the wearer. The ring vibrates when the user veers off the line being scanned or when the user has reached the end of the line. FingerReader can also be used to translate text, making it doubly useful.

Of course it’s far from perfect and is just a research prototype at this point, but its inventors are not ruling out the possibility of developing FingerReader as an actual product. Head to the Fluid Interfaces Group’s website or read their FingerReader paper (pdf) for more info.