Build Your Own Paper Velociraptor

Check out this Kickstarter campaign for KitRex, which is basically a 3D paper velociraptor that you build yourself. 3D paper velociraptor? I’m in. You build the googly-eyed dinosaur by folding and tabbing together specially cut pieces of high-quality Bristol board. It balances on its feet. You can put googly eyes on it, feathers, and what ever you want. 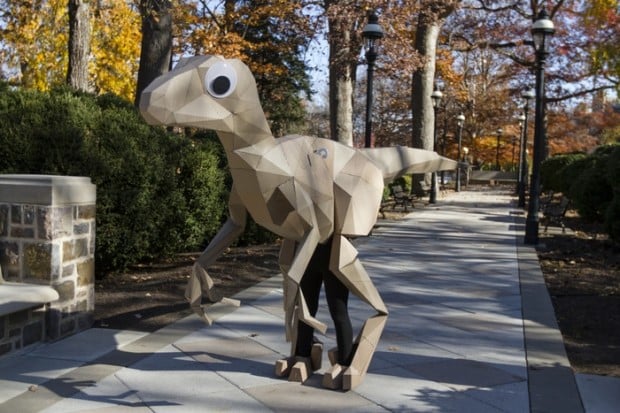 This project came about because of a homework assignment in which creator Lisa Glover was asked to research a manufacturing process and demonstrate it in a unique way. So she researched industrial origami, and in about 50 hours she had designed, cut, and built a wearable 15-ft long velociraptor out of cardboard (shown above). When she decided to wear it to a costume party, needless to say she was the star of the evening. While you can’t buy her velociraptor costume, you can own this smaller, 3-foot-long version of the paper velociraptor.

KitRex is starting out by making paper raptors, but hopes to go on to make a complete paper menagerie of dinosaurs, including the mighty T. Rex.

The project has already made more than 12 times its original $8,000(USD) fundraising goal, because people love them some dinosaurs. If you want one for yourself, pledge at least $20 over on Kickstarter by April 29.