The Motrr Galileo is a nifty device for those who want to get more out of their smartphone’s camera. This compact gadget provides iPhone users with the ability to capture motion-control video effects, as well as other types of remote camera capabilities. 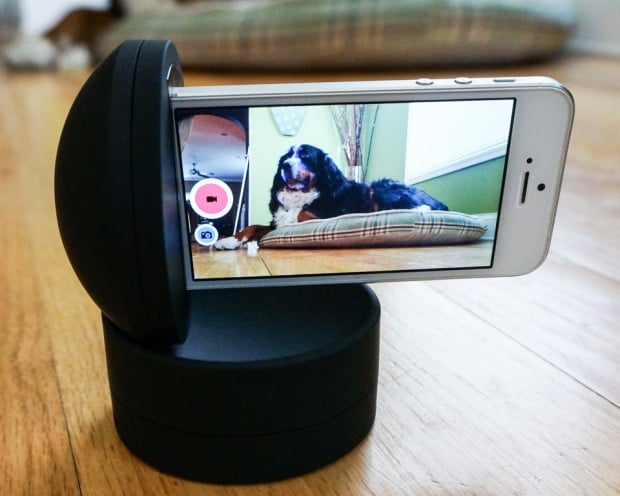 The Galileo is about the size of a thick hockey puck, but it’s actually quite powerful. The device works in concert with a variety of apps which can do everything from motion time-lapse video, to remote-controlled teleconferencing. It can be set on a tabletop or attached to a standard screw-thread tripod for optimal stability in the field. 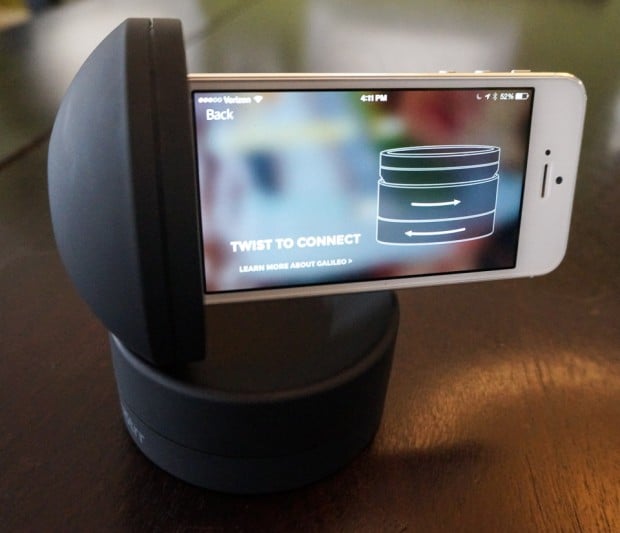 Using the Galileo is easy. Simply choose the proper device insert for your iPhone or iPod Touch, and plug it into a USB charger to wake it up the first time, then load the Motrr app onto your smartphone to pair it and learn about compatible apps. Once you’ve selected an app to use with the Galileo, just twist the device, and it will ask to connect within the app. The Galileo is available in either a 30-pin ($99.95) or Bluetooth version ($149.95) – which is the model I’m using. 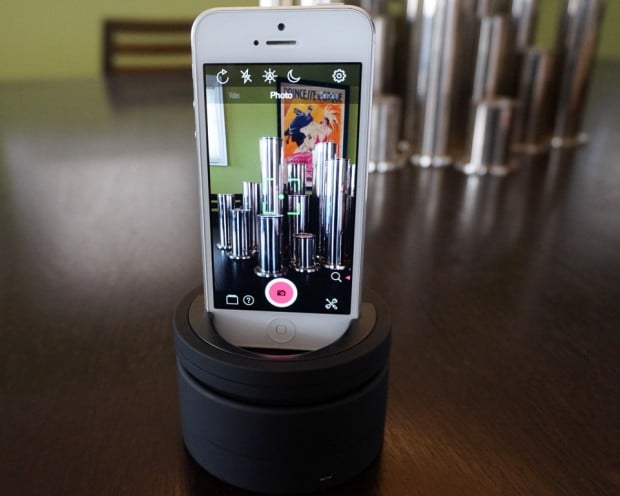 There are a wide variety of apps available, which you can check out on the Motrr website. My two favorites (so far) are TimeLapse, and Sphere. TimeLapse does what you’d expect, automatically capturing time-lapse video from still images, but making it really easy with pre-sets for common time-lapse scenarios. By combining this with the motion-control aspect of the Galileo, you can create sophisticated time-lapse which usually require much more expensive equipment. One thing to keep in mind with time-lapse footage is that you’ll want to make sure both your camera and the Galileo have enough battery charge, and you’ve temporarily disabled notifications.

Sphere is really cool too. It can capture a 360° panoramic image in under a minute. All you need to do is set your iPhone in the Galileo’s dock, and press the touchscreen. Sphere works in concert with the Galileo to capture all of the images needed, then stitch them together into a panorama you can view directly on your phone or share on the Internet. You can see a sample Sphere I shot below. It’s not perfect with aligning horizontal lines like the ones in the siding, but it’s still pretty nifty.

One thing that’s tricky to do with the iPhone is capture a perfectly smooth panoramic image. Using the DMD Panorama app with Galileo, you can capture foolproof circular panoramas in full photo resolution. Click the icon in the upper right corner of the image below to pop open a full-res panorama captured with the Galileo and this app, or click here for the original hi-res image.

One other app I tested with the Galileo was Videography. This app is great for shooting HD video of motion or faces, since it can automatically track these and pan and tilt the camera accordingly, though the motion tracking has a tendency to be a bit jerky compared to the face and color tracking, which seemed to offer smoother movements.

There are a number of other apps I didn’t get a chance to try, but it’s clear that the Galileo offers much more versatility than its simple premise might suggest. For instance, I wouldn’t have thought about using the Galileo’s platform to create a motorized alarm clock. You can also use it for automated home monitoring – assuming you have a spare iPhone or iPod Touch to use.

While not everyone will find a daily use for the Motrr Galileo, anyone who enjoys photography or has a need for remote telepresence will get plenty of value for the price.