The Creatures of Star Wars in Pancake Form

We’ve seen Nathan Shields work his pancake magic before, using the galaxy far far away as his theme. Well, he is back in the kitchen, and presumably wearing an Ewok apron as he creates more magical flapjacks. 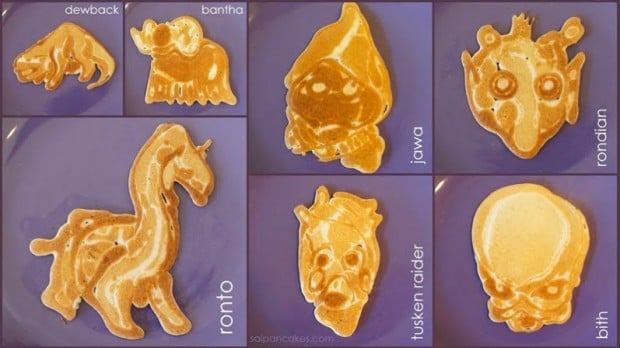 These pancakes show off several alien creatures from the Star Wars universe. Among the pancakes are a Dewback, Bantha, Ronto, Jawa, Tusken raider, Rodian, and even one of those big-headed Bith – though he’s not playing any musical instruments for a change. I love the detail that he gets when making these. They are true works of art. However that won’t stop me from eating a stack of Rontos. Art is for eating.

You would think that Nathan would get sick of pancakes, but luckily for us that is not the case. Great work as usual!