Two–screen phones? Pfff. Queen’s University professor Roel Vertegaal and student Antonio Gomes recently shared their prototype for a smartphone with three screens. They call it PaperFold, and its functionality changes with its form. For instance, the PaperFold can become a phaptop. 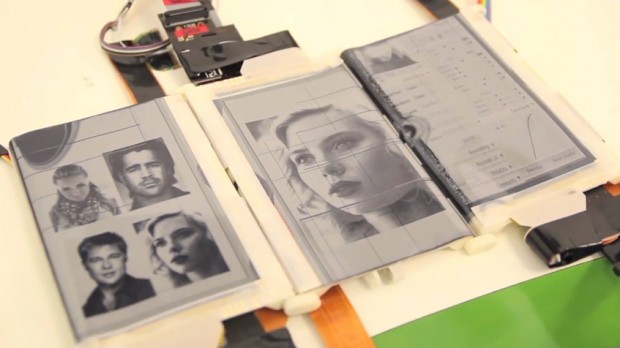 PaperFold has three E-ink displays that can be used in a variety of ways. They can be used to display a menu and drill down to the listed items at the same time. They can also be used to view information sent by a caller while the call is in progress. They can also be used simply as one large screen. But the device can also transform into other devices. In the video below you’ll also see PaperFold turn into a laptop, with one screen acting as a virtual keyboard.

It seems as if the device can automatically change its purpose or execute a command by detecting the orientation of its screens. A somewhat superfluous example of the latter is when PaperFold automatically downloaded a 3D model of a building by arranging the screens into a triangular prism while viewing the building through a map app.

I’d love to have a device like this, but its problem would be the same one we have today: batteries. My phone can barely last a day with just one screen to take care of. Powering two or three LCD or any other colored displays with current consumer battery technology is just asking for a Game Gear 2.0.

[via Queen’s University via Digital Trends]