We featured a small and portable CNC mill a few days ago. Here’s another device that will let you take your workshop where you go. A German-based company called Mr. Beam Lasers is raising funds on Kickstarter for its eponymous product. Mr. Beam is a laser cutter that you can either complete or modify on your own or buy as a ready-to-assemble kit. 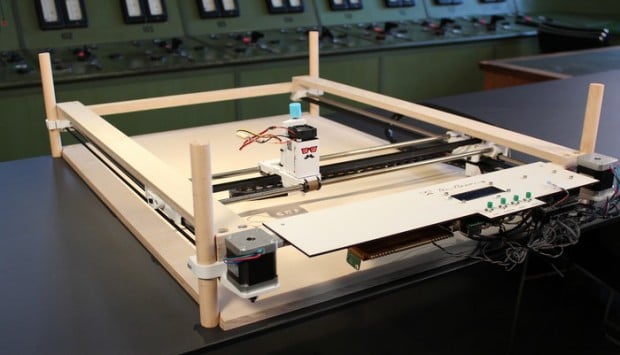 Mr. Beam is controlled by an Arduino Uno, a Raspberry Pi and the company’s Mr. Beam Arduino shield. The rest of its parts are readily available or 3D printed, such as its wooden legs and platform, stepper motors, timing belts and its laser. Currently, Mr. Beam is operated by plugging into your router via Ethernet and then logging on to its web interface. It’s available in two sizes: Mr. Beam Junior has an 8.5″ x 11″ work area, while Mr. Beam Senior has a huge 17″ x 22″ work area.