Parrot Bebop Drone has a Camera and Oculus Rift Support

Parrot has been making automated flying drones for a while. The first of them was the AR.Drone. While at least one person has hacked their AR.Drone to be controlled using an Oculus Rift, Parrot has unveiled that it’s next drone – dubbed the Bebop – will offer optional Oculus Rift support. 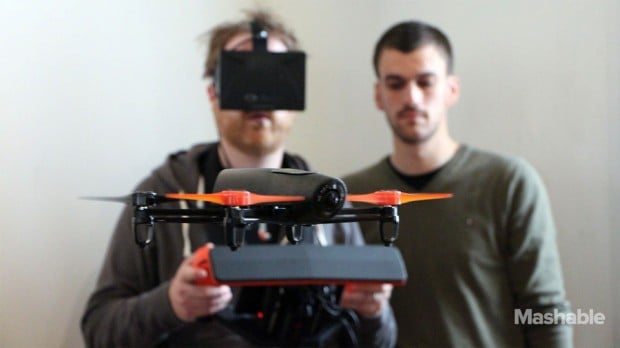 Using that VR headset, and the optional Parrot Skycontroller, users can have an immersive view of what the drone’s camera sees as it flies. The Bebop’s fixed camera is a 14MP unit with a fisheye lens that can shoot 1080p video. The camera also has a robust image stabilization system, and its software lets you zoom in and move around the image, rather than using a motorized gimbal like other competing quadrotors. The Bebop also has GPS support and can be programmed to fly between waypoints autonomously, and return home when done.

The Skycontroller also extends the Wi-Fi range for the video and control to over a mile. Power for the drone comes from a rechargeable battery good for only 12 minutes of flight time per charge. Pricing isn’t announced at this time, but it’s likely to be somewhere North of the $300 price of the AR.Drone. The Parrot Bebop is set to launch in Q4 2014.