Google Glass’ voice recognition software is only as good as the user’s English accent. Even if it were perfect, there are still times when you can’t talk out loud. But how else are you going to input words on a device that small? A company called Whirlscape is working on a possible answer: a  single row virtual keyboard. 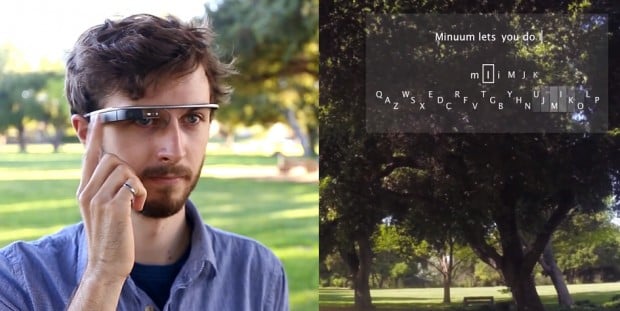 Originally an Android app, Whirlscape’s Minuum keyboard consists of three letter-groups packed in proximity. It uses algorithms to predict and correct what you’re typing. Currently Whirlscape has a working port of Minuum that lets Google Glass users type by either swiping the touchpad or slightly moving their heads. The latter portion of the video shows Whirlscape’s other unimplemented concepts, which involve eye-tracking, projections or gestures.

As you may have thought, Minuum is not a catch-all solution and suffers from the same problem as voice recognition software – it can only auto-correct the languages it knows. But it’s better than nothing. Or everyone talking to themselves.