The Oculus Rift has seen great success even before it’s officially released. But this long interval before full production has given others the chance to survey the field and catch up. One of the more promising competitors is Beijing ANTVR Technology, whose eponymous virtual reality kit sets itself apart by being compatible not just with Windows computers but with anything that has an HDMI output. 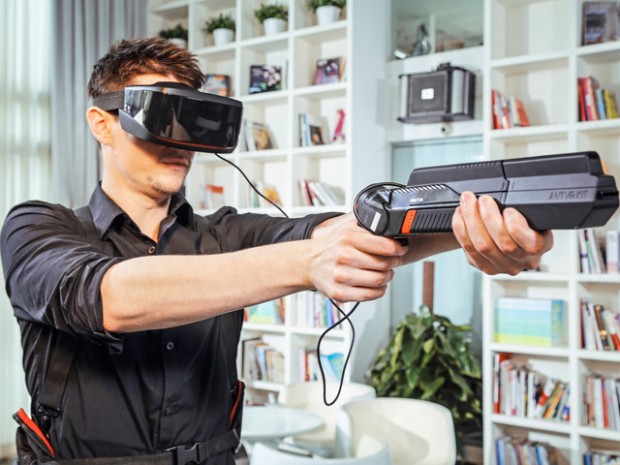 The ANTVR kit consists of a headset, a universal controller and a driver box that fits onto the controller, turning the two into a pistol controller. The tip of the driver box houses the HDMI input, but it also has a USB-based wireless HDMI adapter. The headset displays video at a 4:3 ratio at up 960×1080 for each of its two LCD displays. The headset also has a 100º viewing angle and has an adjustable focus. It’s also spacious enough to accommodate people wearing prescription glasses.

One of the most eye-catching aspects of the ANTVR kit is its universal controller. Along with the aforementioned pistol mode, it can also be a one-button joystick, a Wiimote like gesture controller, a gamepad and a steering wheel. Assuming each mode works well – the gamepad’s buttons seem a bit cramped – it’s amazing how much functionality they’ve packed into one device.

As I said, the ANTVR kit should work out of the box with Windows computers, modern video game consoles and even mobile devices with the help of an HDMI adapter; I’m assuming the company plans for its controller to be cross-platform as well. Its headset can act as both a stereoscopic 3D and as a 2D display, so even if your video or game isn’t in 3D you’ll still be able to use the headset with it.

Pledge at least $300 (USD) on Kickstarter to get an ANTVR kit as a reward. It seems too good to be true, but if ANTVR is the real deal it could help virtual reality reach mainstream success much more than the Rift or Sony’s PS4-only Morpheus headset ever could. Assuming they hit their funding goal, the plan on shipping the first devices out this September.