For those who don’t know, Pyro is one of the X-Men. A lesser known character in the Marvel universe. Even so, his backpack mounted flamethrower is pretty darn cool. I mean hot. It is kind of lame though that Pyro can’t produce fire on his own, but can only control it. 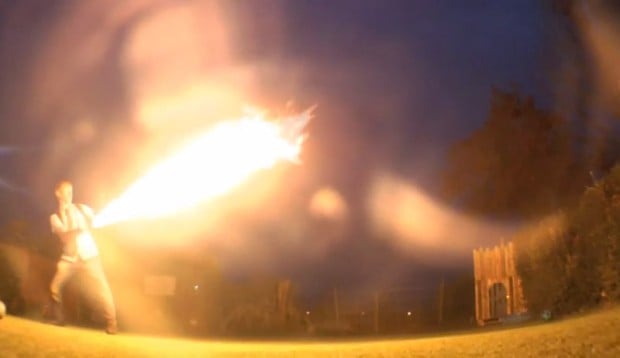 One guy has now brought Pyro to life by making his own flamethrowing back pack, complete with the ability to shoot fire from his hands. That guy is inventor Colin Furze (the guy who made the retractable wolverine claws and Magneto boots). Now he is setting stuff on fire. This guy just can’t get enough of the X-Men.

In fact, he is quickly becoming a one man X-Team. Is there nothing that the X-Men can do that this guy can’t do? Not so far. I bet he gets stumped by Storm’s power. Go ahead try to control the weather. Ha. You can’t. Wait. Was that rain? Damn it!