Would you look forward to school if you could roleplay, level up and earn real rewards in class? If so, ask your teachers to check out Classcraft. Designed by 11th grade Physics teacher and web developer Shawn Young, the free service introduces roleplaying game elements in the classroom to make learning fun and exciting. 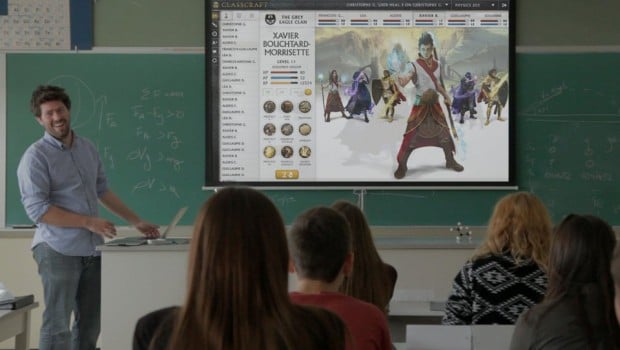 In Classcraft, students are grouped into teams, which should be balanced so that students who excel team up with and help those who are struggling. Students then get to choose from three character classes: healer, warrior or mage. Each class has a different amount of hit points, action points and powers. Teachers will then manage their class’ stats and interaction through the Classcraft web app. They shouldn’t have to worry about Classcraft being cumbersome; Shawn says managing the game only takes up a few minutes total in class.

The powers are one of the main draws of Classcraft, because a good number of them have real world effects. For example, as shown in the image below Mages have a power called Time Warp that grants them extra time in exams. Other powers include the Healer’s Ardent Faith, which can be used during an exam to ask his teacher if his answer to a question is correct, and the Warrior’s Hunting, which lets him eat in class. Really. 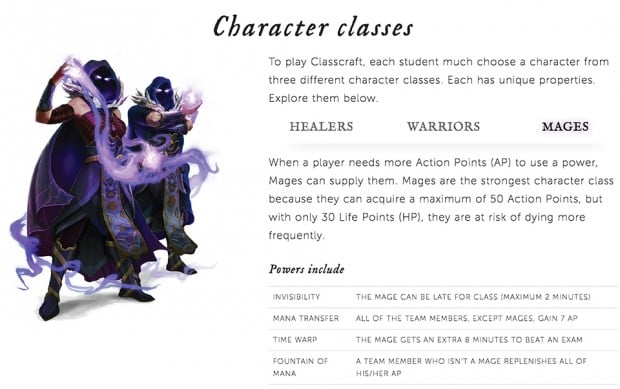 In an interview with VentureBeat, Shawn admitted that students can sometimes abuse their powers – for example, stacking the Mages’ Invisibility lets a student come in really late for class. But like RPGs, Classcraft also has risks and penalties. This mainly comes in the form of damage, e.g. you get 30 damage for an incomplete homework.

If a student’s character dies he will roll the “Death Dice” to determine his punishment, which can include detention or less time to complete the next exam. Further, when one member dies his other teammates lose hit points too. This encourages students to look out for each other, a positive motivation to gain or maintain individual success. 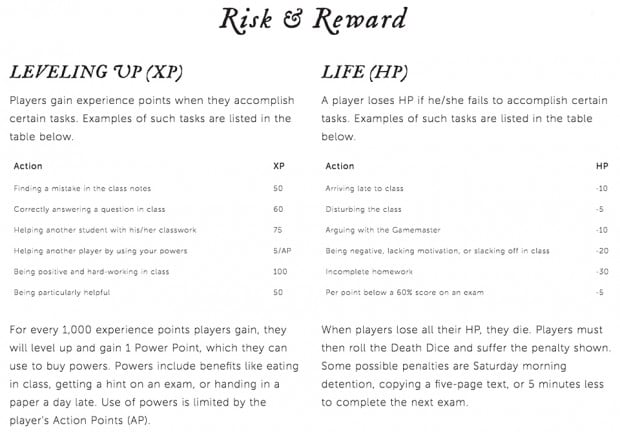 Shawn says that Classcraft made his students more focused and obedient, so much so that some students that were penalized gamely accepted their punishments. Other teachers have told him that “their class averages have gone up 20, 25 percent in the months following implementing Classcraft.” If you think Shawn and the teachers are biased, you should watch the testimonials from students who have tried Classcraft.

Teachers can already sign up with Classcraft for free. A paid membership tier with perks such as access to mobile apps and further customization will be introduced this September, but the free membership option will always be available.

There’s a lot I didn’t cover here – including the in-game currency that students can opt to purchase with real money – so I highly suggest reading VentureBeat’s article for more on Classcraft. Its Vimeo page also has lots of informative videos.