Someone teach the folks at Evil Mad Scientist Laboratories how to be malevolent. Not only are they still making good projects, they recently teamed up with a man named Daniel Gentleman. As a pet project, Daniel wanted to make a robot that could control a Surface Pro 2. When he saw Evil Mad Scientist’s WaterColorBot, he knew he’d found the right robot for the job. 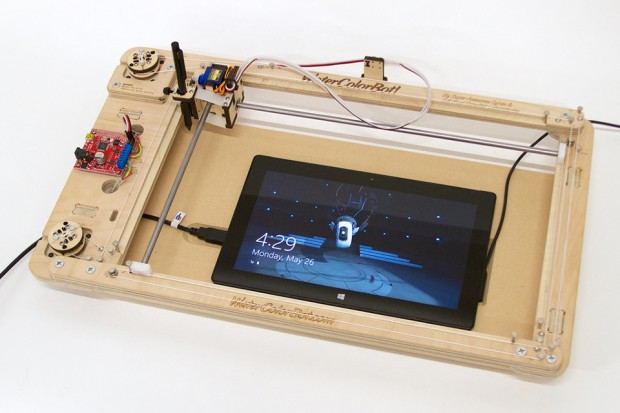 In his guest post at the Evil Mad Scientist Labs blog, Daniel said that the WaterColorBot was a great candidate to control Microsoft’s hybrid computer because the Surface Pro 2 has a built-in digitizer. This means that it can track a stylus precisely without the need for electrical grounding, as opposed to the capacitive touchscreens on most tablets. When he shared his project with Evil Mad Scientist Labs, they invited him to their shop. They made a custom board for the bottom of the WaterColorBot so that the Surface Pro 2 would fit snugly and stay in place. To test their setup, they let the WaterColorBot do what it does best:

I guess that was the computer equivalent of body painting. To make the WaterColorBot do more than draw on the tablet, Daniel’s next plan is “[t]eaching the robot how to see!” You’re not planning on becoming the Lawnmower Man are you Daniel?