The Raspberry Pi is powerful enough to run a software emulator for classic consoles. We’ve seen it used to make a custom portable gaming system, a tiny arcade machine and even a gigantic Game Boy costume. Travis Brown aka XodusTech may have come up with the best take on the computer as a retro console. He stuffed a Raspberry Pi (among other things) inside a Game Boy Pocket’s body. 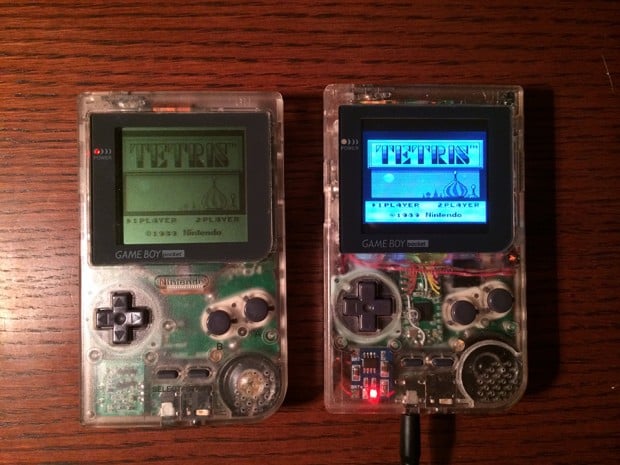 The image above shows a vanilla Game Boy Pocket on the left, and Travis’ Pi-Pocket on the right. Using RetroPie, Travis loaded emulators not just for Game Boy games but for the NES, Sega Master System, Game Gear and Linux as well. Travis connected the Game Boy Pocket’s buttons to the Raspberry Pi with the help of a Teensy 2.0. A Li-ion rechargeable battery lets him play up to 3 hours per charge.

Head to Travis’ website to find out how you can make your own Pi-Pocket. If Nintendo has reached a point where it’s willing to borrow Mega Man, Pac-Man and Sonic for one game, it might as well go all out and make a multi-system retro console like this one.