Mininch Tool Pen Multi-tool: The Write Tool for the Job

The Mininch Tool Pen Multi-tool is like those pencils where you pop the lead out and then put the empty plastic in the top to push up a fresh point. Remember those? This is like that, only manlier. Mininch has made a screwdriver using this concept and it seems pretty handy. 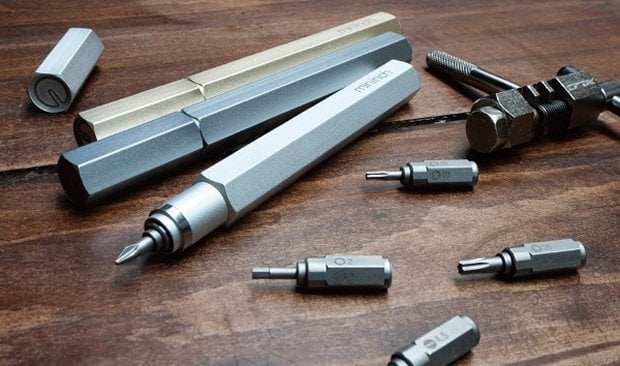 The Mininch Tool Pen looks like a pen, but instead of writing tips, you get a set of useful screwdriver bits for those small jobs that pop up around the house. Unlike most multi headed screwdrivers, this is not bulky. Everything you need is in a compact form. It is made out of solid aluminum and holds six bits, but you can choose from 13 available options. Though it would be nice if one of the bits were an actual pen or a Sharpie.

The design is thin and even manages to be attractive. It is nice to see a well designed screwdriver that isn’t ugly. This multi-tool screwdriver set is easy to carry around in your pocket. You can preorder it through Kickstarter right now and sets start at $45(USD).