Last month we saw a Game Boy Pocket’s case and buttons used to make a portable console emulator based on the Raspberry Pi. Then we saw a similar system packed in a 3D printed case. Recently a man named John Hassl showed that it’s possible to make the same system using an original Game Boy case and buttons. He calls his system the Super Mega Ultra Pi Boy 64… Thingy Build. Or Super Pi Boy for short. 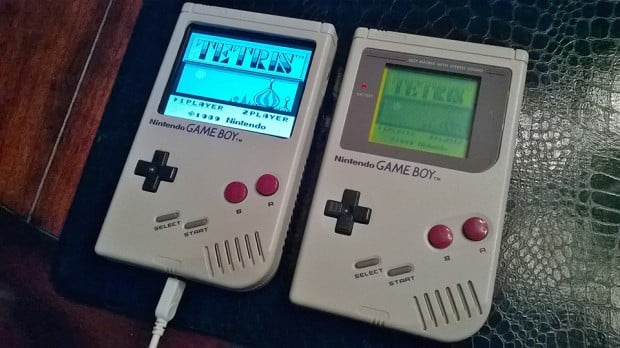 As with the Game Boy Pocket project, John went through a lot of trouble to fit the Raspberry Pi and the new screen inside the Game Boy case, but as you can see he did a great job considering the limitations. He had to cut out the battery compartment to make room, which was fine because he didn’t need it anyway. The biggest flaw, if you could call it that, is the noticeable omission of the Game Boy’s gray frame. That’s because John chose to use a 3.5″ LCD screen, which is substantially larger than the Game Boy’s 2.6″ screen and thus wouldn’t fit unless he widened the window on the case. Check out the Super Pi Boy in action in the videos below:

Head to John’s blog to for more on how he made the Super Pi Boy.