EA has announced a new subscription gaming service for users of the Xbox One game console called EA Access. The subscription service is available with a monthly fee of $4.99. For that monthly fee, gamers get access to a library of games called The Vault. 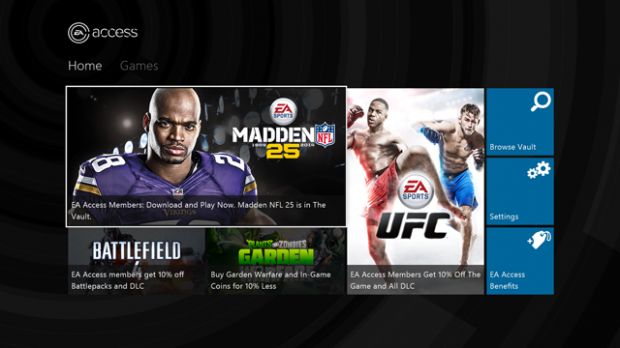 It’s unclear exactly which games are included in The Vault, but we do know a few of the titles that will be in there. The Vault will include games like FIFA 14, Peggle 2, Madden NFL 25, and Battlefield 4 for starters.

Subscribers will also get a 10% discount when buying any EA digital content from full games to services like Battlefield 4 Premium. Subscribers also get early access to new titles up to five days before they release to the public – they’ll be time limited, but you’ll be able to save your progress for when the full game is released.

In addition to the monthly option, you can grab a full year’s subscription to EA Access for just $29.99.