Nested Presents a World Through Menus: the Workflow of Life

At their essence, games – video games, board games, sports – consists of nothing but choices. Will you move here? Will you attack this? And so on. Take those choices away and you’re no longer playing. In roleplaying video games some of the hundreds of choices we’re often urged to make involve exploration, and often consequently, narrative. If you love that part of RPGs, check out Nested. 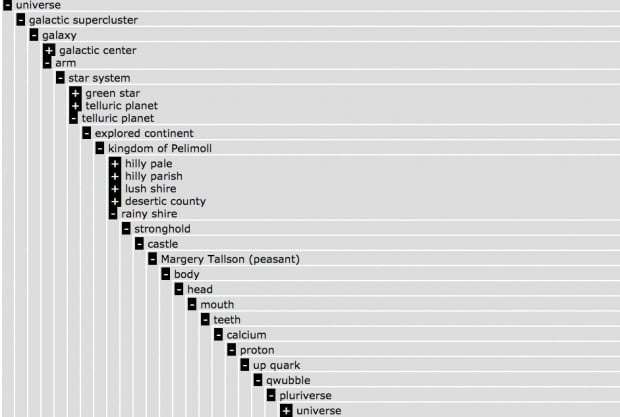 Nested was released last year by Julien Thiennot aka Orteil, more famously known for Cookie Clicker. Julien calls Nested “a simulation of everything”, but don’t think Spore or No Man’s Sky just yet. Think Zork. Or the CliffsNotes for Zork. You see, Nested is a procedurally generated text-only game, presented in nested menus. You start with the universe, which contains within it galactic superclusters, each of which has a galaxy, each of which has planets and so on.

Many of Nested’s menus are recursive – i.e. they’ll eventually lead to another universe menu. But eventually you’ll get used to its dead ends – or are they eternal beginnings? – and stumble upon thoughts, notes and detailed descriptions of objects. Here’s a video walkthrough by RockLeeSmile:

You can play Nested for free. If you’re really lazy you can read what other people have found on Reddit. On one hand, it’s amazing how much fun you can have with menus. On the other hand, I find it hilarious that even in this barest of bare states the player still has to wade through lots of cruft to get to the good stuff.