You can already get battery-powered soldering irons, as well as ones that are powered via USB. But for some reason there doesn’t seem to be a soldering iron with a built-in battery that’s also rechargeable via USB. Thanks to Isaac Porras you can now make such a device. Or at least help him mass produce it. 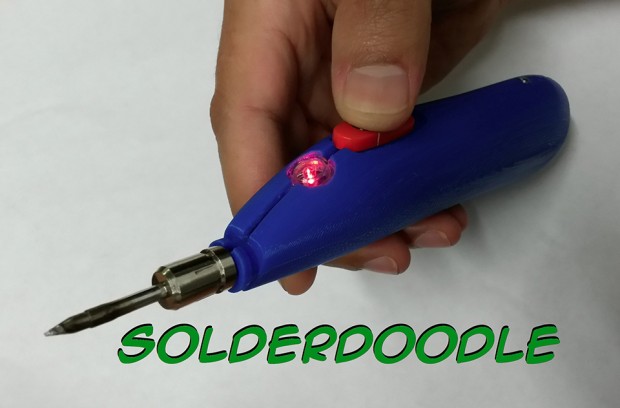 Isaac’s Solderdoodle Pro prototype is based on the heating element of a Weller BP645 soldering iron, along with a 3350mAh Li-ion battery and a charging circuit, all crammed into a 3D printed case. Isaac says the Solderdoodle Pro can get to 700ºF in 30 seconds, and stay there for over an hour before the battery needs to be recharged. Needless to say it’s not advisable to keep it that hot for that long; it’s just Isaac’s way of testing the Solderdoodle Pro’s battery life.

Pledge at least $39 (USD) on Kickstarter to get a Solderdoodle Pro as a reward. You can also hack one yourself using Isaac’s guide on Instructables.