A few years ago we featured a hack that lets you keep the contents of your LCD monitor to yourself. The hack involves taking out one of the polarizers in the display and installing them into a pair of glasses. A Japanese company is hoping to profit from that exact same hack by creating an Android tablet with a similarly modified screen, as well as a modded iPad Air and a 42″ LCD monitor. 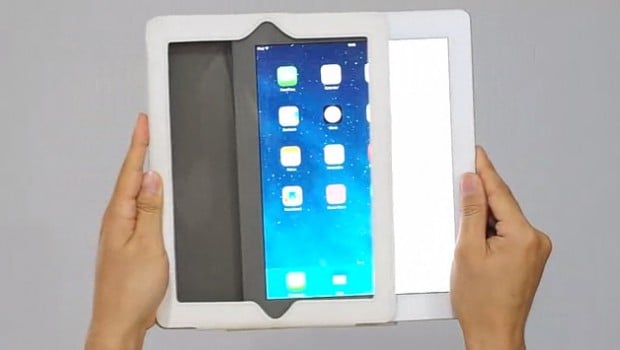 The company hasn’t released the Android tablet’s final specs yet, which kinda makes it a sketchy offer. But the important thing is that, as with the previously mentioned hack, the tablet’s screen will appear to be completely white unless you wear the polarized sunglasses, which will be included with the tablet. The tablet will also come with a case that has a polarizer – as seen in the image above – for when you want to share your tablet’s display. The modded iPad Air will also come with the sunglasses and case, while the 42″ monitor will be bundled with the sunglasses and a square meter of the polarizer.

I think it’s funny that someone is selling what is essentially a broken product. Then again the hack is quite difficult and time-consuming. Pledge at least $99 (USD) on Kickstarter to get the Android tablet. You’ll have to shell out a ridiculous $999 for the modded iPad Air and $2,999 for the monitor. Makers can also pledge $25 for a DIY kit that will let you hack one LCD monitor.