Robot Folds Itself into a Usable Form and Walks Away

A group of researchers working together from Harvard and MIT have created a cool folding robot that can transform itself from a flat sheet to a functioning robot and walk away without human intervention. Inspired by origami and natural folding structures, the robot is made from a flat sheet of paper and a sheet of polystyrene plastic. The plastic is the sort used in Shrinky Dinks. 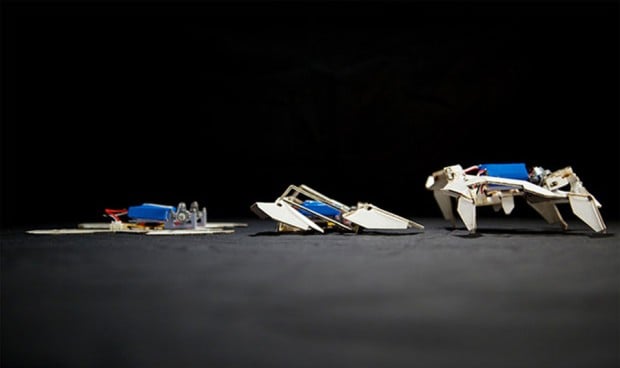 The plastic sheet is etched with hinges in the correct locations and when heat is applied, the plastic folds itself. Other than self-folding plastic, it also has a flexible circuit board in the center, two motors, a microcontroller, and a pair of batteries.

When the batteries are connected heat is generated in the circuits, which causes the plastic to fold. The team hopes to get the robot to transform itself based on environmental cues like temperature or pressure down the road. Future designs may also swap the polystyrene with a different material that needs less heat to fold.