LEGO enthusiast Diavo Voltaggio won the Best Mindstorms award at this year’s BrickFair Virginia for his sweet robotic hand and arm. Powered by the Mindstorms EV3, it has four buttons – one for each finger – right where Diavo’s hand rests for easy operation. It also has several LEDs and a cradle for his smartphone. 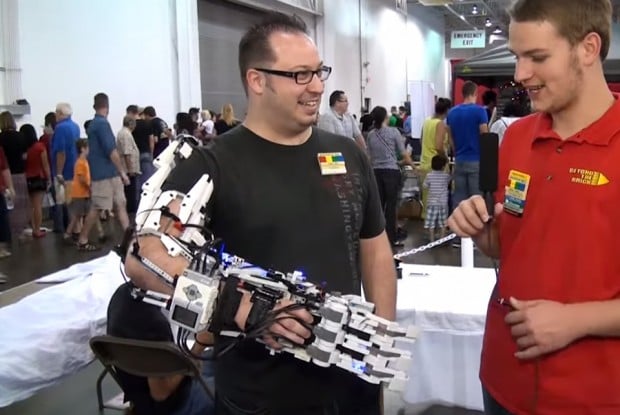 This is the toy’s sixth version and according to Diavo is one of the sturdiest yet. Most of the arm parts are actually there for support; Davio said that his earlier models were flimsy or wobbled in places. It just so happened that the braces and other support structures make the arm look even more menacing. Here’s Beyond the Brick’s interview with Diavo at BrickFair:

Be LEGO Man Diavo! Complete your transformation! You can check out some of the previous versions of Diavo’s robot hand and arm on his YouTube page.

[via Beyond the Brick & Diavo Voltaggio via Gizmodo]