We’ve seen a couple of 3D printers that can create multicolored objects in one build, but they’re out of the price range of mere mortals. You can get the reasonably affordable MakerBot Replicator 2X, but it can only print in two different colors. Or you can wait for something like the 3D4C color printer. 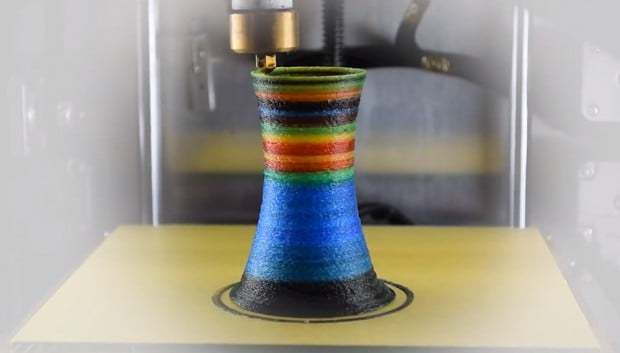 Like many paper printers, 3D4C uses the CMYK color model, except with PLA or ABS filament instead of ink cartridges. The filament for each of the four base colors each have their own extruder, but they merge and form different colors through the hot-end extruder. The 3D printer also has two nozzles: the common 0.4mm diameter nozzle and a 0.8mm diameter nozzle for faster printing.

My biggest problem with the 3D4C is that it seems too good to be true. As of this writing you can pledge at least £850 (~$1,400 USD) on Kickstarter to get the printer as a reward. Even its non-early bird price of about $1,700 is still way less than the Replicator 2X’s $2,499 price tag. At the very least, inventors Felix Chan and Cyrus Kuk should engage with their commenters and release more demo videos of the 3D printer to prove its worth.