I guess this is a thing now. After seeing the hilariously boring Fish Plays Pokémon, software developer Andrew Hill wondered if he could make the same setup but for a fighting game. The result is Fish Play Street Fighter. Thankfully, it’s just as funny as its inspiration but is a billion times more exciting. 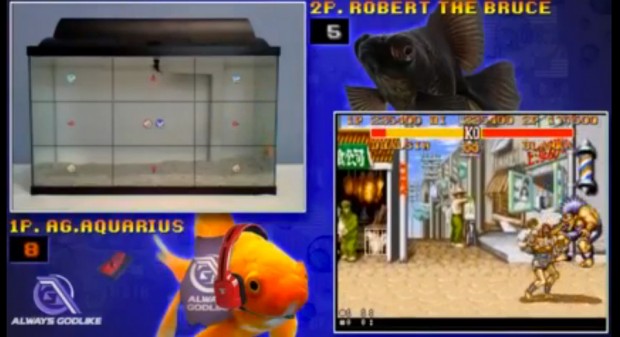 Fish Play Street Fighter is a lot like Fish Plays Pokémon – the aquarium is divided into zones, with each zone corresponding to a command in Street Fighter. But because this is a two-player game, Andrew used color detection so that the movements of his orange goldfish Aquarius are turned into key presses for player 1, while his black goldfish Robert the Bruce sends key presses to player 2. Andrew’s arrangement of the commands leads to some tense moments, although right now Dhalsim and Blanka are just jumping.

Grab your popcorn and head to Twitch to see what our forefathers died for. The next step? Fish Play Simulator, a game where you play a goldfish in a Fish Play aquarium. Naturally that will be followed up by Fish Plays Fish Play Simulator. This is probably how the Matrix starts.