“Mark of War” Is A Computer Wargame That Costs Less Than One Tiny, Poorly-Painted Mini

The last time renowned Brit geek Gav Thorpe designed a fantasy wargame, it was called “Warhammer Fantasy Battles.” It takes a time commitment roughly equivalent to a full time job, and it costs an arm and three warp-mutated legs. If you like painting tiny, tiny eyes (like me, for some reason), and have too much time and money (unlike me, unfortunately), you’ll love it. However, most people don’t like the former and don’t have the latter, so this may be more up their alley: Mark of War is a Windows/Mac strategy game that does its very best to approximate a tabletop game. 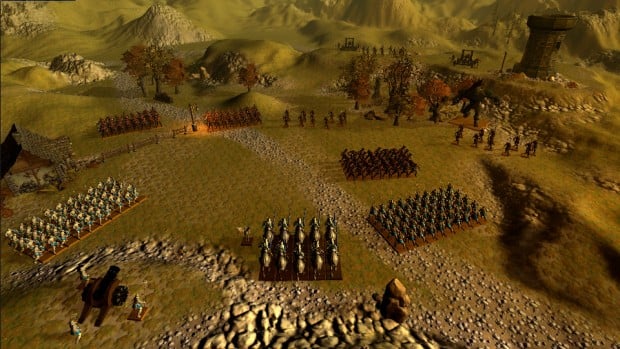 No, it probably won’t have the same impact as setting up a physical army that you poured three months’ time, two months’ pay, and a bit of literal blood and tears in to, but it looks close. We’re willing to bet that you’ve never played Warhammer on a table that looked this good either. Gamers are so often chintzy when it comes to terrain; it’s a real shame.

Of course, this is still wargaming, so it has to be weirdly expensive in some way. The crowdfunding goal for Mark of War is $500,000, but you can get in on the action with a copy of the game for as little as $20(USD). Stretch goals include additional armies, enhanced army customization, a single player campaign, a Total War-esque “Map Conquest” mode, and sieges.