We’ve seen a couch on wheels before, but this one made by Engineering students in University of New South Wales (UNSW) Australia can drive in any direction and has a Raspberry Pi for a brain. 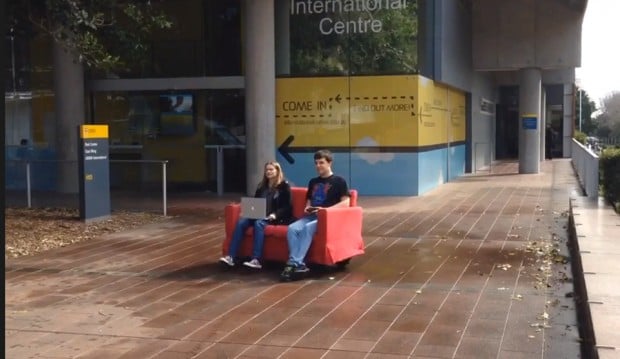 Led by Steph McArthur and Will Andrew, the UNSW students built a custom steel chassis equipped with four independently controlled Mecanum wheels, which use multiple rollers instead of a single tire to achieve omnidirectional movement. The wheels are powered by electric scooter motors. The students use a gamepad (UNSW states that its an Xbox gamepad, but I’m pretty sure it’s from Logitech) to steer the couch while they chill on it.

There’s a slightly longer video of the couch in action at the UNSW Faculty of Engineering’s Facebook page. The students are constantly working on the couch, especially on its wheels. Andrew said that right now, “[i]f there’s different types of terrain under each wheel, or there’s more load on one wheel than the others, then the couch doesn’t drive as you intend it to.” They also want to add sensors and make the couch move autonomously. Now that would be a rockin’ chair.

[via UNSW via Ubergizmo]