Dyson 360 Eye: It Sucks Way More Than a Roomba… In a Good Way

The idea of a robot vacuum is awesome. The fleshy human gets to sit around playing Team Fortress 2/reading awesome books/checking Technabob, and the soulless robot with no sense of boredom vacuums the whole house; it’s perfect. Sadly the idea does have some flaws. The cleaning pattern of most robot vacuums is erratic at best, and as vacuums go, they kinda suck by virtue of not sucking enough. 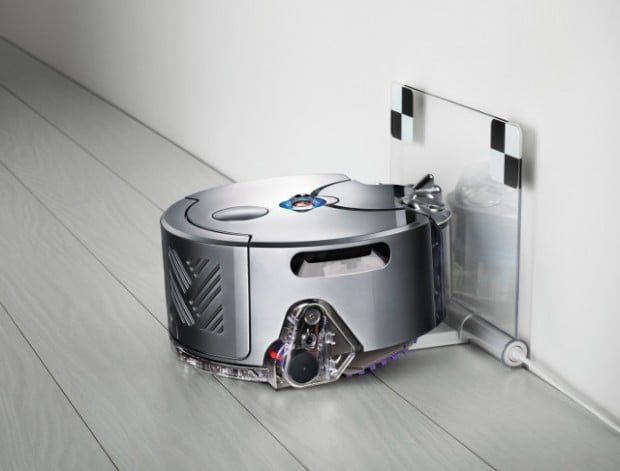 This is the Dyson 360 Eye, a new robot vacuum from the company that brought you ballsy vacuums and small desk fans that are freakishly expensive. It promises to be the suckiest of all robot vacuums, cleaning more like a real vacuum and less like a lazy high-school student who you’re paying not quite enough money to clean. It also has 360 degree vision, and finds land marks in the room so that it can vacuum evenly in nine square meter sectors. For maneuverability over obstacles like floor transition strips, rugs, and barbed wire, the 360 Eye is also equipped with two tank tracks. So that you don’t even have to stand up to lord over your new vacuum-slave, you can operate the device via a smartphone app.

Of course, it still leaves something to be desired. Being a circle, it’s incapable of cleaning a room’s corners, meaning that you’ll have a few inches that you’ll have to clean yourself, like a filthy peasant. Unlike the competition, the 360 Eye is also rather tall, which will prevent it from being able to clean underneath a lot of furniture, but will offer a cat a better vantage point. There’s no word yet on pricing, or the availability of a cat-bed/throne, but the device will launch in Japan in the spring of 2015 and the rest of the world shortly afterwards.