Apple today revealed it’s long-anticipated entry into the wearable tech space, with its first ever smartwatch. No longer dubbed “iWatch,” the timepiece is named simply “Apple Watch“. The watch is designed to be the most accurate watch available, incredibly customizable, and work seamlessly with iPhone, health and fitness apps. 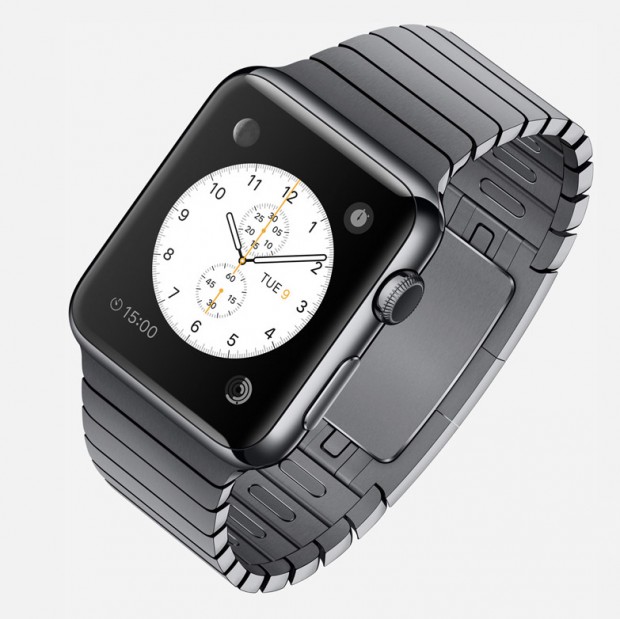 The first thing you’ll notice about the Apple watch is its striking industrial design. While Apple chose to go with a rectangular face, the watch has curvaceous surfaces, and a scratch-resistant sapphire crystal front which appears to blend seamlessly into the metal case of the watch. It’s also not big and clunky like some other smartwatches on the market. It actually looks like it’s the size of a normal watch. Its touchscreen is unique in that it not only detects touches, but can detect pressure, so it can differentiate between a tap and a press. 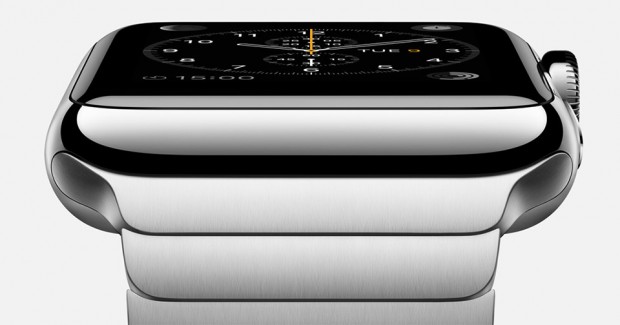 The watch offers a totally new user interface, not a tiny version of iOS. Apple worked hard to create a unique UI which is ideally suited to the tiny screen of a watch, and in large part I think they’ve succeeded. Instead of supporting gestures like pinch-zoom on its touchscreen, the watch uses its “digital crown” control on the side to provide contextual input methods such as zooming in and out, adjusting sliders, or scrolling up and down. This means you won’t be blocking the interface with your fingertip nearly as often as with other smartwatches. A simple push of the crown returns you to the home screen. 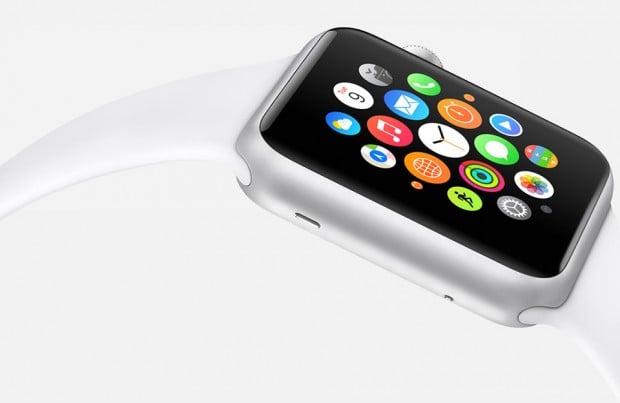 Speaking of the home screen, it features a sort of cloud of apps which you can tap to access. At the center is the watch function, of course, and if you have more apps installed than will fit on one screen you can drag to view apps beyond the screen’s boundaries. There’s also a UI convention called “glances,” which give you quick access to information, like current weather, your next appointment, music and media remote control. 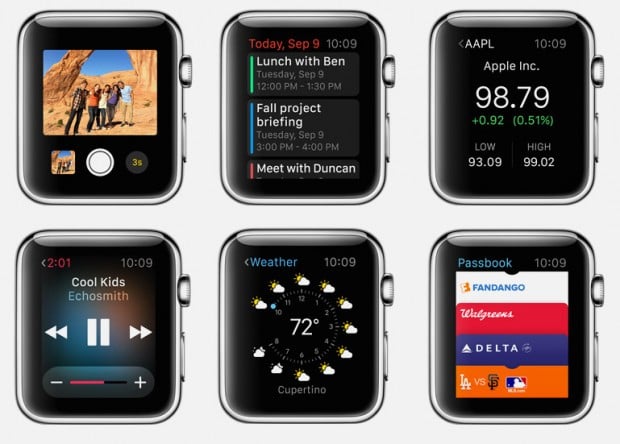 Simply swipe up from the bottom of the screen to view your glances. The watch is also smart enough to only turn on when you turn your wrist and raise it to view the display, which should reduce battery drain. 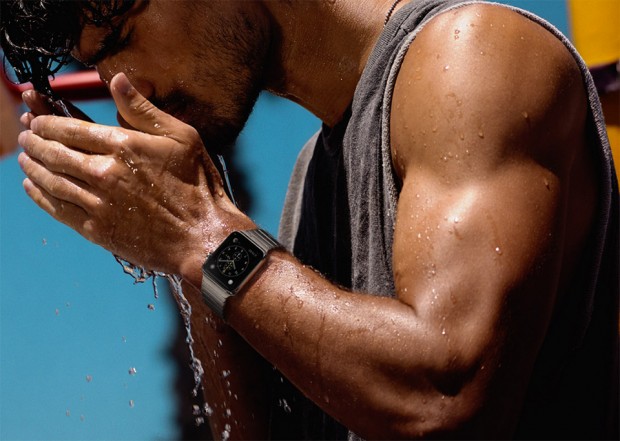 In terms of features, the Apple Watch seems jam-packed for such a tiny device. Naturally, it’s a watch, and syncs its time up to the National Atomic clock to ensure accuracy within +/- 50 milliseconds. It comes pre-loaded with numerous watch faces, ranging from analog, to digital, to informational, to decorative. I especially like the astronomy face, which shows current positions of planets, a sort of nod to analog watches with these sort of complications. 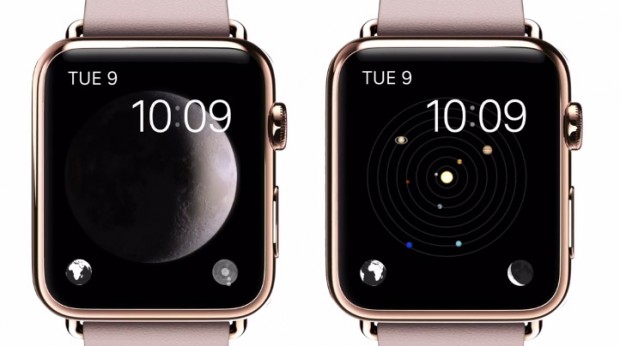 The watch also packs a haptic feedback system, called the “Taptic Engine”, which combines tiny vibrations with sound from the speaker to provide feedback from the watch. This is especially useful for notifications, as it can provide silent taps as well. Speaking of notifications, the prompts which appear on screen are contextual, based on the type of notification, offering quick replies for messages, and let you choose from text, voice, or animated emoji responses. 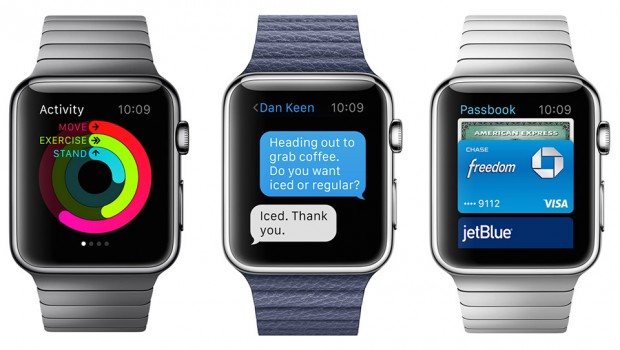 Naturally, Siri is built in, and accessed by pressing in on the digital crown for a little longer. While the screen might be small, Siri provides quite a bit of functionality, returning detailed results such as movie times, descriptions and GPS directions. Other primary apps include weather, traffic, photo browsing, and of course health and fitness. The Maps app is particularly neat, offering turn-by-turn directions and unique haptic sensations to indicate which way to turn. The phone also offers support for Apple Pay, their newly-announced NFC-based payment system. 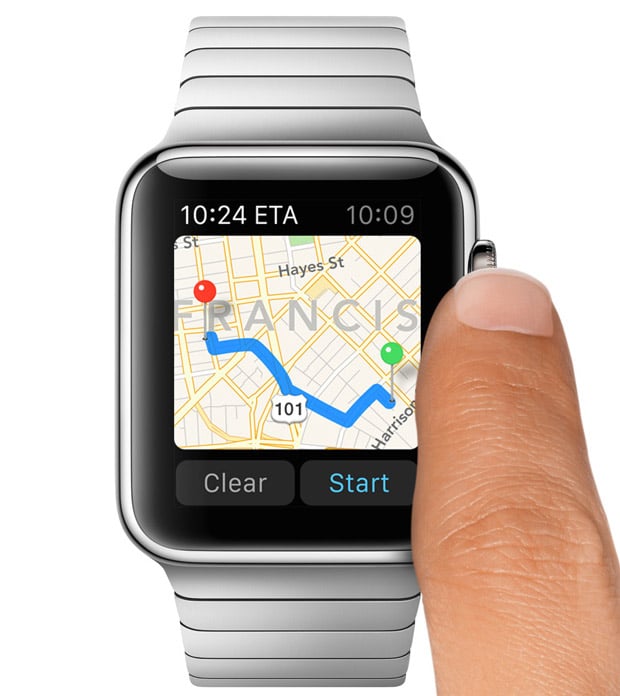 Using the built-in accelerometer and paired with the GPS and Wi-Fi capabilities of the iPhone, the watch can track activities such as walking, running, cycling, or more. It can also track calories burned, and even the time you spend standing each day. The Zirconia watch back contains infrared LEDs and cameras to accurately monitor your heart rate. 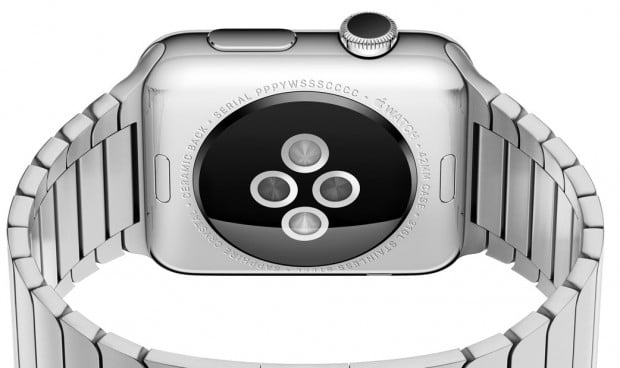 Another feature of the Apple Watch is something called “Digital Touch.” This allows you to have one-on-one conversations with friends, sending haptic touches by tapping on the screen, real-time doodles, or even sending your heartbeat. Okay, that’s just plain weird. Apple is calling this a revolutionary new way to communicate, though it seems a little gimmicky to me. Who knows. I probably thought email and text messaging was gimmicky once. 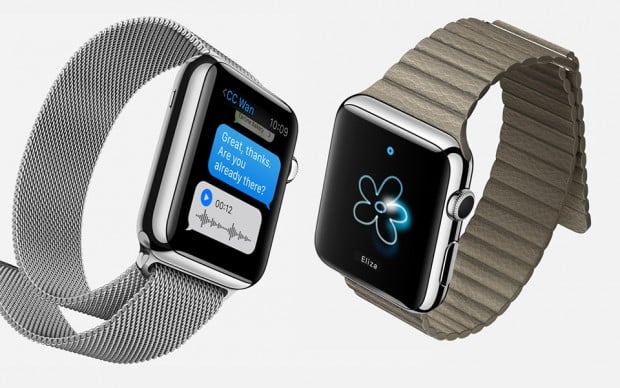 Beyond the built-in apps, the Apple Watch will support 3rd-party apps, and Apple will soon be providing their WatchKit SDK to developers to start building apps. Examples of 3rd-party apps shown so far include BMW’s electric car charging status app, which also offers GPS directions back to your car, as well as a Honeywell app for setting your home climate control system remotely.

While Apple hasn’t said anything about battery life, they did recognize that people will want to wear the watch all day long, and are offering an easy charging method, which combines a quick MagSafe-style connector with wireless charging. This should make lazy bedside charging stupid simple. 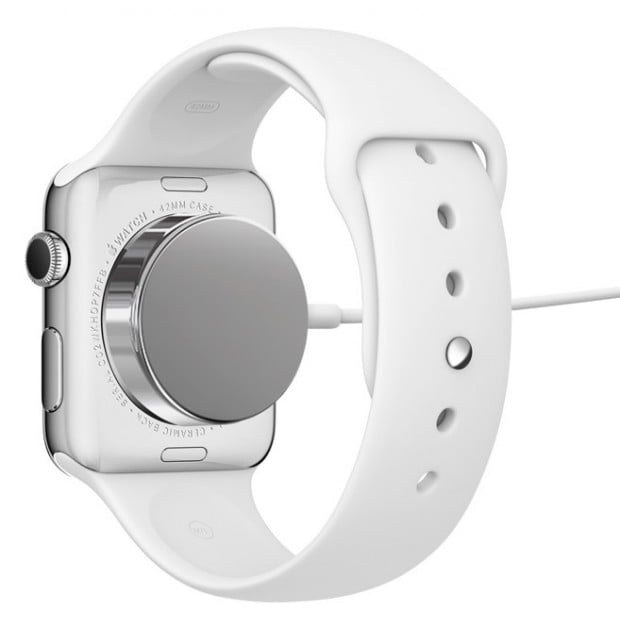 Apple will be offering its watch in a number of different configurations, including the Apple Watch, which has a stainless steel case, the Apple Watch Sport, with a lightweight anodized aluminum case, and the Apple Watch Edition, a schmancy 18-karat gold model. There’s no word yet on water or shock resistance, but I can’t imagine that Apple hasn’t given this some thought. 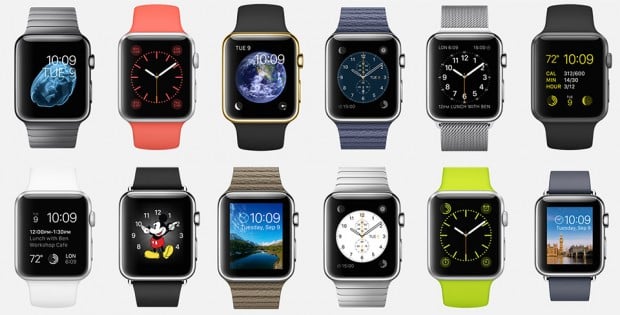 You’ll be able to choose from 38mm or 42mm case size. There will also be a wide variety of bands available, including a durable sport band, a modern leather loop band, traditional look leather and stainless steel link bands, as well as a stainless steel mesh band. The more contemporary bands use a magnetic closure, which not only looks cool, but provides easy adjustability. Personally, the design below is my favorite: 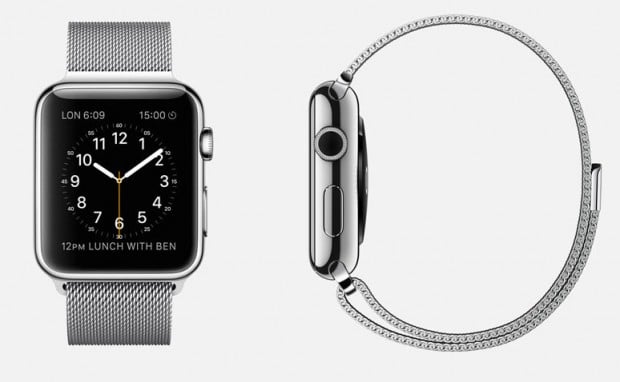 One thing to keep in mind is that Apple says the Apple Watch will require the use of an iPhone 5 or later. It’s unclear if your iPhone must be in proximity at all times, or if some features will continue to work if your iPhone isn’t close by. Apple hasn’t revealed full pricing or release date details on the Apple Watch line as of yet, but says that prices will “start at $349” and the watch will be available in “Early 2015.”